"We discussed issues related to our security and Korea-U.S. cooperation, including the denuclearization of North Korea," Yoon of the conservative People Power Party (PPP) told reporters after a 30-minute meeting with Pence.

Pence, who served under former U.S. President Donald Trump, was in town to attend a peace forum.

Yoon said he and the former U.S. vice president also shared some personal stories during the meeting, adding the latter's father, Edward Pence, served in the U.S. Army during the 1950-53 Korean War and received the Bronze Star.

Pence expressed his concerns over North Korea's recent provocations, and Yoon pledged to make more efforts to strengthen the Seoul-Washington alliance if elected, according to PPP officials.

Yoon has taken a hard-line stance on the North, including suggesting the need for a preemptive strike on the country in the event of an imminent threat. 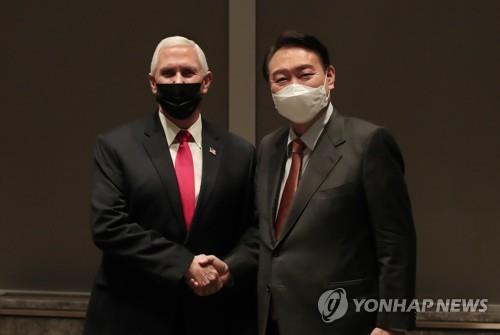