Ahn, an entrepreneur-turned-politician, reported his personal assets to be worth 197.99 billion won (US$165 million), the biggest amount among the 11 presidential candidates who finished candidacy registration with the NEC on Sunday. 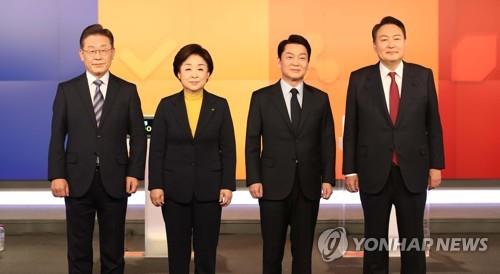 Lee's reported assets included an apartment valued at 1.33 billion won, bank deposits worth 1.29 billion won, a condo and a car.

In Yoon's case, his wife, Kim Keon-hee, accounted for most of his declared assets. He reported his personal assets at 846 million won and Kim's assets at about 6.9 billion won, most of which are bank deposits.

Sim reported her husband's apartment valued at about 500 million won and her mother's apartment worth 1.01 billion won.

For Ahn, the lion's share of his wealth is 1.86 million shares in Ahn Lab, the nation's largest antivirus software company that he founded, worth about 184 billion won.

Ahn also included a Seoul apartment, two minivans and 11.5 billion won in bank deposits and other financial assets among his personal wealth.

Among minor presidential candidates, meanwhile, Kim Dong-yeon of the New Wave Party reported his assets to be worth about 4.1 billion won and Huh Kyung-young of the National Revolutionary Party declared he is worth 26.4 billion won.