The quake occurred about 36 kilometers north-northwest of Kilju, North Hamgyong Province, at 2:33 p.m., according to the Korea Meteorological Administration (KMA).

It was the second tremor in the area since a 3.1 magnitude natural earthquake struck the region on Friday.

Kilju is where North Korea's Punggye-ri nuclear testing site is located. Over 20 earthquakes with a magnitude of 2.0 or bigger have struck regions near Kilju since 1978, with a 3.2 magnitude quake that occurred Sept. 23, 2017, being the strongest.

The epicenter of Monday's quake was at a latitude of 41.27 degrees north and a longitude of 129.24 degrees east at a depth of 22 km. The KMA said the quake occurred naturally.

So far, seven quakes with a magnitude of 2.0 or bigger have been reported on the Korean Peninsula this year. 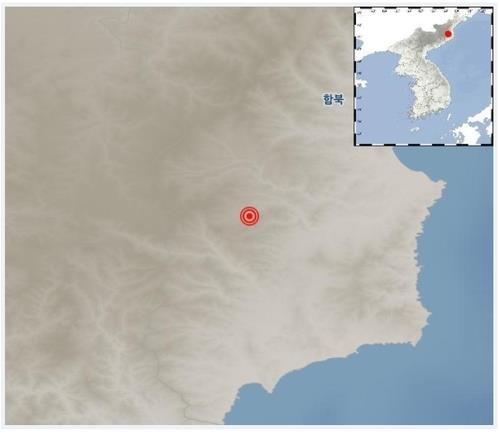