SEOUL, Feb. 14 (Yonhap) -- The U.N. special rapporteur on North Korea's human rights situation is scheduled to visit South Korea this week to compile data and have discussions on the matter, the foreign ministry said Monday.

Tomas Ojea Quintana will visit Seoul from Feb. 15-23 to meet with South Korean government officials, politicians as well as civic groups and North Korean defectors to prepare for an annual report to be submitted to the Human Rights Council next month.

He plans to have a meeting with Second Vice Foreign Minister Choi Jong-moon on Wednesday, and discuss findings and recommendations during a press briefing on the last day of his visit, the ministry said.

It would be his seventh trip to South Korea since taking office in August 2016 and the last before his term ends in August. 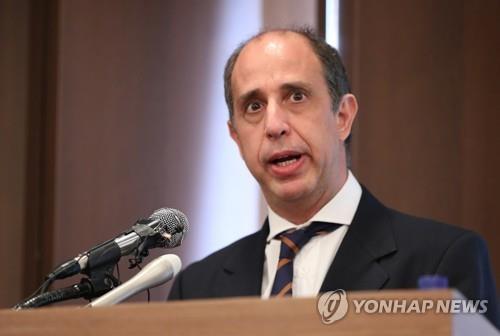