Last week, the White House released a 19-page document highlighting a focus on marshaling "collective capacity" from a network of regional allies and partners, which it pitched as "our single greatest asymmetric strength" in the midst of an intensifying Sino-U.S. rivalry.

Expanded three-way cooperation with Seoul and Tokyo is part of the strategy's "Indo-Pacific Action Plan" to be pursued in the "next 12 to 24 months" -- an apparent call for the two allies to move past their historical enmity and refocus on shared challenges. 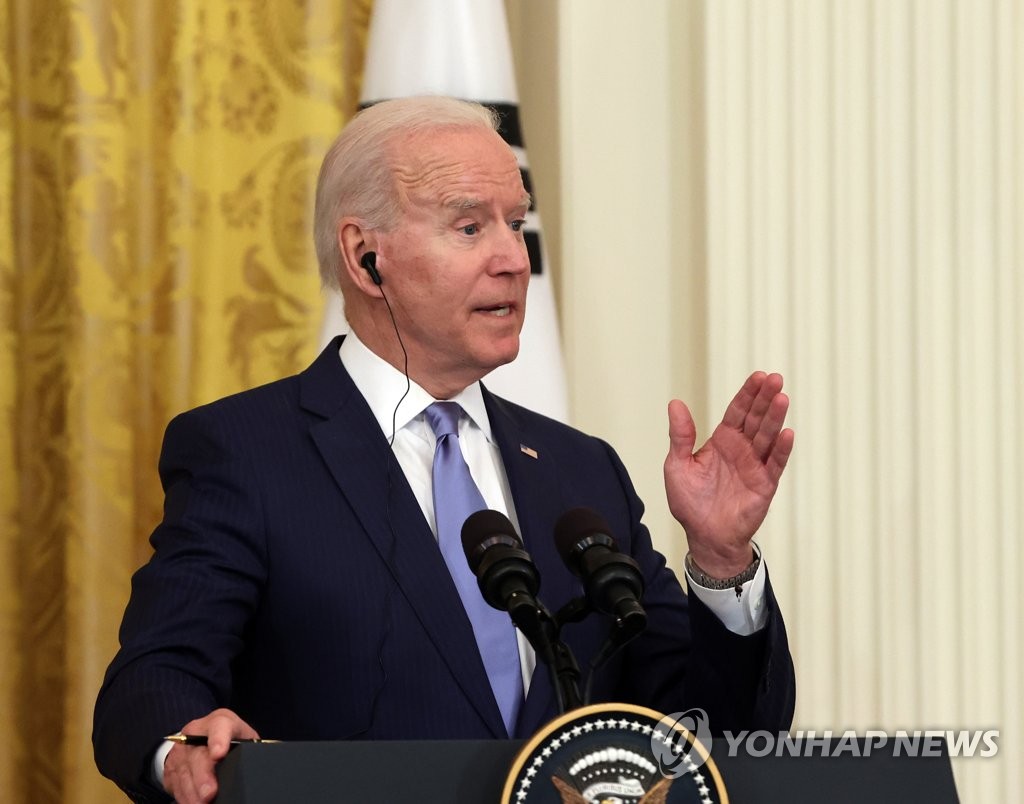 The fleshed-out strategy came as Japan's bid for the UNESCO heritage designation of a mine linked to wartime forced labor has added to tensions between Seoul and Tokyo already caught in long-simmering territorial and historical feuds.

"Central to the Biden administration's Indo-Pacific strategy is restoring regional alliances and promoting solidarity among them so as to keep a rising China in check," Park Won-gon, professor of North Korean studies at Ewha Womans University, said.

"Given the central pillars of security and economics in the strategy, there's no doubt that South Korea and Japan are the Indo-Pacific allies well-placed to undergird those pillars -- a reason why the U.S. needs to galvanize trilateral cooperation," he added.

For its security pillar, the strategy employs a set of multilateral mechanisms, such as the three-way cooperation with South Korea and Japan and the Quad forum involving the U.S., India, Australia and Japan, as well as the AUKUS platform consisting of the U.S., Britain and Australia.

Except for shared toughness on China, Biden's Indo-Pacific strategy stood in stark contrast with the "America-first" approach of his predecessor, Donald Trump, which critics said smacked of isolationism and alienated allies.

Washington's current pursuit of broad-based regional cooperation comes as it strives to prevail in an increasingly acrimonious rivalry with China over maritime security, technological leadership, trade and other fronts.

"We seek to build the collective capacity to rise to 21st century challenges and seize opportunities, whether that has to do with climate, with PRC behavior or preparing for the next pandemic and recovering from this one," a senior Washington official said on condition of anonymity last Friday, referring to China by its official name, People's Republic of China.

The inclusion of three-way cooperation with Seoul and Tokyo in the strategy has raised speculation that Washington might envision a more formalized mode of cooperation with the Asian allies -- a goal long hamstrung by their historical animosity.

Despite the recent flare-up of historical tensions between the Asian allies, it signals Washington's intent to double down on that goal, underscoring the need to put up a united front against Pyongyang.

The desired unity of purpose was on full display Saturday when the top diplomats of South Korea, the U.S. and Japan -- Chung Eui-yong, Antony Blinken and Yoshimasa Hayashi -- met in Hawaii on the weekend in response to the North's seven rounds of missile tests last month.

America's emphatic appeal for solidarity also came as it seeks to stitch together support from allies and partners to cope with the looming Russian invasion of Ukraine.

Stakes are high for the U.S. in the standoff over Ukraine as an escalation into a full-blown war could mean a deterrence failure for America and its allies, and could lead to yet another forceful redrawing of the European map akin to one caused by Moscow's 2014 annexation of the Crimea.

"The Secretary and Foreign Ministers discussed the Russian military build-up along Ukraine's borders and shared unwavering support for Ukraine's sovereignty and territorial integrity," the three countries said in a joint statement following the talks in Hawaii. "They committed to work closely together to deter further Russian escalation."

Ostensibly, however, the U.S.' push for trilateral cooperation with the South and Japan appears to put more emphasis on the North Korean challenge.

"Nearly every major Indo-Pacific challenge requires close cooperation among the United States' allies and partners, particularly Japan and the ROK," the document reads. "We will continue to cooperate closely through trilateral channels on the DPRK."

Beyond the security front, the U.S. will also work with South Korea and Japan on regional development and infrastructure, critical technology and supply-chain issues among others, it added.

"The U.S. cannot help but emphasize at least rhetorically the importance of broad-based cooperation with the Asian allies beyond the hitherto security centric partnership, as its rivalry with China unfolds in terms of values, ideology and across the board," Kim Tae-hyung, professor of international politics at Soongsil University, said.

Touching on Pyongyang's "destabilizing nuclear and missile" programs, the strategy document said Washington will continue to seek "serious and sustained" dialogue while strengthening extended deterrence to respond to North Korean provocations and remaining "prepared to deter -- and, if necessary, defeat -- any aggression to the United States and our allies."

The Biden administration's strategy poses a key geopolitical question to South Korea's next government to be launched in May: How will it modulate the depth and width of three-way cooperation with the U.S. and Japan?

"Along with how to deal with North Korean threats, the issue of the degree to which Seoul reinforces trilateral cooperation with Washington and Tokyo will be a priority matter for the next administration in Seoul as it's also linked to relations with China," Shin Bum-Cheol, director for diplomacy and security at the Research Institute for Economy and Society, said.