SEOUL, Feb. 15 (Yonhap) -- A woman in her 40s has been killed while under police protection, officials said Tuesday, in the latest in a series of preventable deaths expected to spark calls for better protection measures for such victims.

The victim, whose identity was withheld, was having a drink with an unidentified man at a bar in Seoul's western Guro district when a man in his 50s visited the bar and stabbed the two Monday night, officials said.

She was taken to a hospital but died, while the other man was under treatment with injuries.

The suspect immediately fled the scene.

The woman sought police help through an emergency smartwatch provided to potential victims of stalking and other serious crimes right before the attack. Police received the alert at 10:11 p.m. and arrived at the scene four minutes later.

The incident was the latest in a series of deaths of people despite being under police protection.

In November, a woman in her 30s was killed by a 36-year-old stalker despite requesting police help through the emergency watch. In December, a 26-year-old man named Lee Seok-joon killed his former girlfriend's mother and seriously injured her younger brother. The ex-girlfriend was also under police protection at the time.

The emergency smartwatch system, currently under a pilot run, is set to officially go into operation across the country later this month. The system is aimed at better protecting victims by picking up accurate location signals when the wearers report an emergency through the watch. 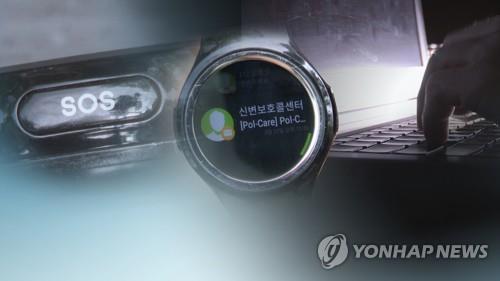 Another woman killed while under police protection

Another woman killed while under police protection