According to health authorities and local governments, a total of 85,114 infection cases had been confirmed nationwide as of 9 p.m., up 28,787 from the same time a day ago.

The figure was up 2.1 times from a week ago and 5.4 times from two weeks ago. 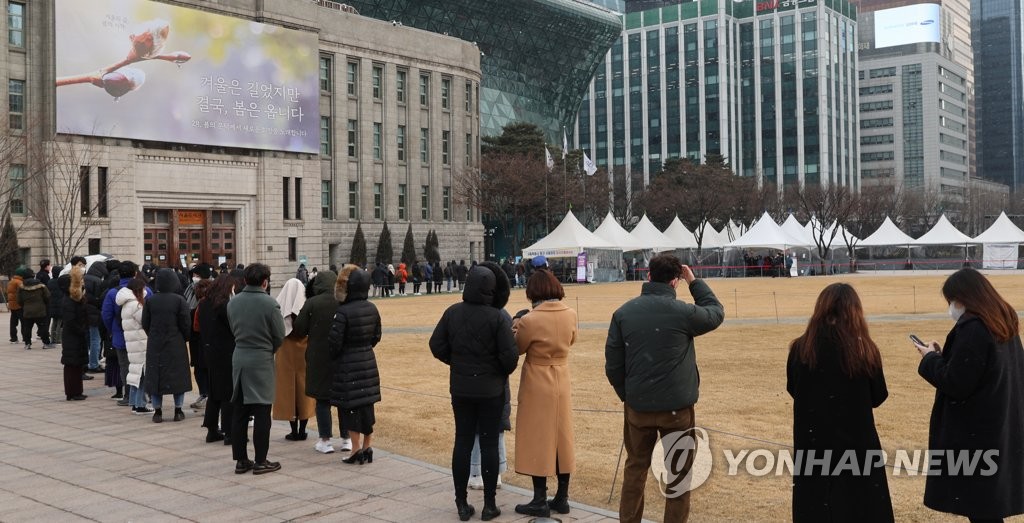 Earlier in the morning, the Korea Disease Control and Prevention Agency (KDCA) reported 57,177 new COVID-19 infections for Monday, including 57,012 local cases, raising the total caseload to 1,462,421. It marked the sixth day in a row that daily infections have surpassed 50,000.

The KDCA said the number of critically ill COVID-19 patients was 314, up eight from a day earlier, it added. The daily tally stayed above 300 for the second straight day.

On Monday, the country began administering the fourth dose of COVID-19 vaccines to people with weak immune systems, with plans to expand the second booster shot to patients at nursing facilities early next month.

The KDCA said it has no plans yet to roll out second booster shots to the rest of the population.

Prime Minister Kim Boo-kyum hinted at announcing measures to ease the current tough social distancing curbs within this week in a way that will help small businesses hard hit by the pandemic but not go as far as causing the further spread of the virus.

"We will come up with a decision so as not to fuel the spread of the omicron variant while also helping (small businesses) to ease the burden," he said in an interview Monday.

Health authorities have warned that daily new cases could hit 170,000 by around the end of this month. The National Institute of Mathematical Sciences, a state-run think tank, estimated the figure could even soar as high as 360,000 by early next month.

The number of patients receiving at-home treatment rose to an all-time high of 245,940, topping 200,000 for the third straight day.

In a press briefing, a senior health official at the KDCA said at-home treatment patients will be allowed to get their medicine prescribed at any local pharmacy starting Wednesday.

Previously, prescription drugs for people receiving treatment at home were only available at designated pharmacies.

The government plans to announce changes to the current social distancing rules Friday after discussions with experts and relevant authorities, the official added.

Of the locally transmitted cases announced early Monday, Gyeonggi Province that surrounds Seoul reported 17,236, followed by Seoul with 12,402 and the western port city of Incheon with 4,904, the KDCA said. Cases from overseas went up 165 to 27,493.

As of Tuesday, 29.62 million people, or 57.7 percent of the country's 52 million population, had received booster shots. The number of fully vaccinated people came to 44.24 million, accounting for 86.2 percent.