Seoul's planned application for a membership of the Comprehensive and Progressive Agreement for Trans-Pacific Partnership (CPTPP) was one of the major agenda items for talks between South Korea's Trade Minister Yeo Han-koo and New Zealand's Minister for Trade and Export Growth Damien O'Connor held in the day via teleconferencing, according to the Ministry of Trade, Industry and Energy.

The CPTPP involves 11 nations, including New Zealand, Japan, Australia, Canada and Mexico, which accounted for 15 percent of the world's total trade volume as of 2019.

As the depository of the pact, New Zealand is responsible for various tasks, such as receiving and circulating specified notifications and requests made under the agreement.

"Minister O'Connor said his country actively supports Seoul for its plan to join the pact and voiced expectations for continued cooperation regarding the issue," the ministry said in a release.

During the talks, the two sides also discussed the "Indo-Pacific economic framework (IPEF)," which the United States has sought to launch in a move to better engage with Asia on trade amid an intensifying Sino-U.S. rivalry.

"South Korea and New Zealand share the notion that it is crucial for the envisioned framework to be open, transparent and inclusive, and to present standards and cooperation that many nations in the region can accept," the ministry said in a release.

South Korea submitted an application for joining DEPA last year, and the first round of relevant talks took place in January.

As the world's first plurilateral digital pact, the DEPA is an agreement signed by New Zealand, Singapore and Chile to establish key rules on digital trade issues, such as digital identities, cross-border data flows and artificial intelligence. It came into effect in January last year. 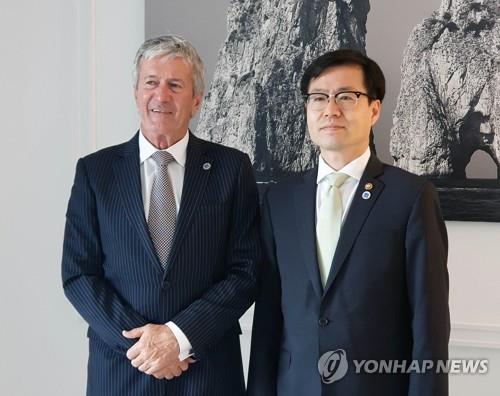