SEOUL, Feb. 15 (Yonhap) -- South Korea plans to mobilize all policy means to minimize the economic fallout of the Ukraine crisis and reduce market volatility amid growing tensions between the United States and Russia over the region, a senior government official said Tuesday.

The government plans to implement contingency measures if Russia invades Ukraine and the U.S. and its allies' move to impose strong sanctions heightens economic uncertainty, according to First Vice Finance Minister Lee Eog-weon.

"The government plans to mobilize all policy means to prevent the Ukraine situation from hurting the real economy and minimize market volatility," Lee said at a pan-government task force on the Ukraine crisis. President Moon Jae-in ordered government officials on Monday to come up with "urgent" measures in response to the Ukraine situation when he presided over a Cabinet-level meeting on economic security issues.

South Korea's financial market has seen increased volatility recently amid the Ukraine risks and the prospect for the U.S. Federal Reserve's move to accelerate its monetary tightening.

In the morning session on Tuesday, Seoul's benchmark stock index traded lower in choppy trade after it slid 1.57 percent a day earlier.

The Korean currency has also sharply weakened against the U.S. dollar in recent months. The won was trading at 1,197.90 won per the greenback as of 10:43 a.m., down 6.8 won from the previous session.

Escalating tensions between Russia and the U.S. over Ukraine have also driven up already high oil prices due to tight supplies. Russia is one of the largest oil producers.

Dubai crude, South Korea's benchmark, soared to $92.72 per barrel Monday, up from $77.12 at the end of last year. South Korea depends mainly on imports for its energy needs.

The government earlier said it will secure additional stockpiles of major raw materials, energy and other key items and seek to expand their domestic production while diversifying import channels in preparation for possible supply disruptions. 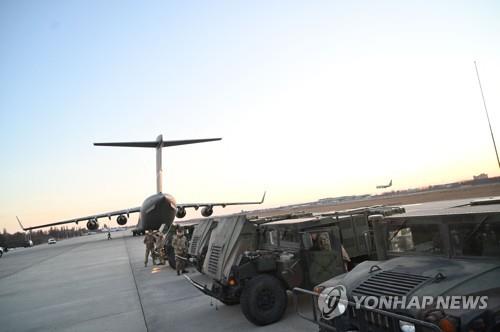