SEOUL, Feb. 15 (Yonhap) -- Minor presidential candidate Ahn Cheol-soo called on main opposition candidate Yoon Suk-yeol on Tuesday to respond to his offer of a candidacy merger at an early date.

Ahn of the centrist People's Party said he would like to hear from Yoon of the conservative People Power Party himself as it was a proposal made by one presidential candidate to another.

"I would like (Yoon) to state his position at the earliest possible date," Ahn told reporters on his campaign trail in Gumi, 261 kilometers southeast of Seoul. 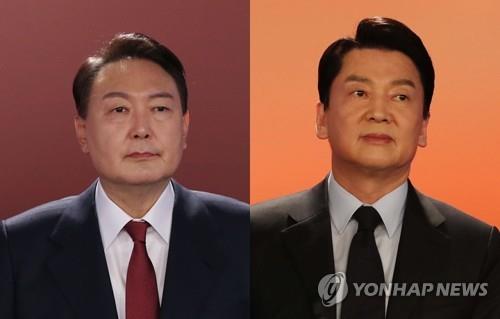 Ahn proposed merging campaigns on Sunday, saying the two sides should field a single candidate to take on ruling Democratic Party presidential candidate Lee Jae-myung on March 9 and choose between him and Yoon through a public opinion survey similar to one used to determine the opposition standard-bearer during last April's Seoul mayoral by-election.

Yoon and his party welcomed the idea of a merger, which has long been considered a potential game-changer in a remarkably tight presidential race.

But they balked at the notion of a survey over concern some of the respondents, who are supporters of Lee and his party, could pick Ahn just to increase Lee's chances of winning the election, as polls show Lee and Yoon neck and neck at around 40 percent support each but Ahn a distant third at below 10 percent.

"We're in no hurry. We have time," an official close to Yoon's campaign told Yonhap News Agency, adding Ahn's proposed survey is not under consideration.

"If Ahn has dreams for the future, be it as a prime minister, party leader or candidate in the next presidential election, wouldn't it be better to concede to Yoon and burden him with that political debt?" the official said.

Speculation of a possible meeting between the two men has grown since Yoon said a merger, if it were to happen, would result from a one-on-one meeting, such as "over a cup of coffee," and not through drawn-out negotiations between their campaigns.

One source with knowledge of Yoon's campaign said Ahn could agree to last-minute negotiations on Feb. 26 or 27, after taking part in two presidential TV debates earlier that week and just before Feb. 28, when ballots go to print.

Ahn calls on Yoon to respond to merger offer

Ahn calls on Yoon to respond to merger offer