Trading volume was moderate at about 575 million shares worth some 9.2 trillion won (US$7.7 billion), with losers outnumbering gainers 698 to 174. 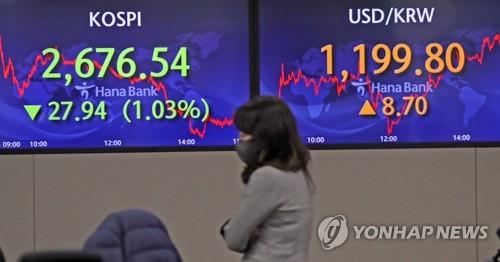 The South Korean government said it will make policy efforts to reign in the market volatility from the Ukraine crisis, citing the growing tensions between the United States and Russia over the region.

"Investors seem to have dumped local stocks due to the continued jitters over Ukraine uncertainties and the rising oil prices," Shinhan Investment researcher Choi Yoo-joon said.

In Seoul, market bellwether Samsung Electronics closed unchanged from the previous session at 73,700 won, and No. 2 chipmaker SK hynix dropped 4.15 percent to 127,000 won.

The local currency closed at 1,199.8 won against the U.S. dollar, down 8.7 won from the previous session's close.

Bond prices, which move inversely to yields, closed higher. The yield on three-year Treasurys lost 0.2 basis point to 2.345 percent, and the return on the benchmark five-year government bond fell 1.7 basis points to 2.524 percent.

(LEAD) Seoul stocks down for 3rd day amid Ukraine risk

(LEAD) Seoul stocks down for 3rd day amid Ukraine risk