SEOUL, Feb. 15 (Yonhap) -- Hundreds of restaurant and other small business owners demonstrated in central Seoul on Tuesday, demanding the government lift business hour curfews and sufficiently compensate them for losses from the prolonged anti-virus restraints.

Some 200 members of the so-called emergency association of small business hit by COVID-19 gathered near Gwanghwamun Square in central Seoul in a protest rally calling for the right to survival. 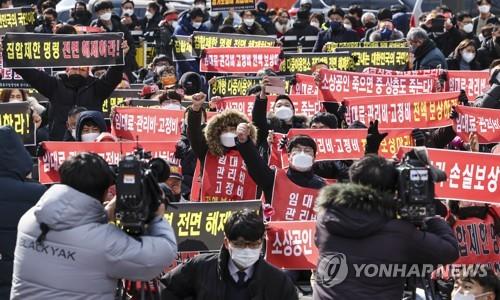 Under the current anti-COVID-19 measures, private gatherings of more than six people are banned nationwide, and cafes and restaurants are subject to a 9 p.m. curfew, while the operations of other businesses, such as cram schools, are prohibited after 10 p.m.

The protesters demanded those curfews be scrapped and operators of businesses with more than 1 billion won (US$833,333 million) in sales be included in the government's upcoming compensation measures for those hit by COVID-19.

They also implored the government to compensate 100 percent of the losses from social distancing measures.

"We came out to the streets to safeguard our rights to survival. (After a long period of anti-virus restraints), we have been left with nothing, and the meager government compensations won't guarantee our survival," Oh Ho-seok, a co-head of the association said.

"We will continue to fight to the end until our damages are compensated 100 percent," he said.

Members of the association plan to launch a civil disobedience campaign against the curfews to run their businesses around the clock starting Monday if their demands are not accepted. They also plan to file a lawsuit against the state anti-virus measures imposed on private businesses.

The protesters later marched to Cheong Wa Dae and delivered a policy proposal outlining their demands to the presidential office.

An extra budget bill worth over 14 trillion won, primarily designed to compensate for business damages caused by anti-virus restrictions, is currently pending at the National Assembly.

The government is set to announce on Friday whether the current social distancing regime, including the business hour curfews and the private gathering cap, will be further extended or softened for the coming weeks. 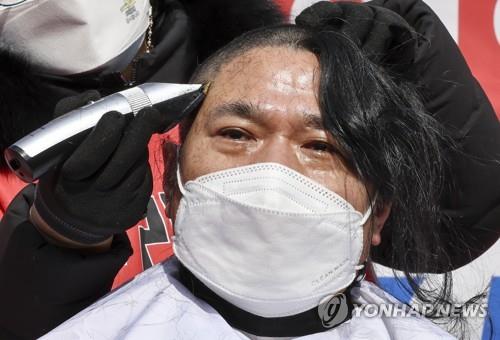