Kim was present at the event to pay tribute to the former leader, which was held in the northwestern city of Samjiyon the previous day, the North's official Korean Central News Agency (KCNA) said. It is the first time the North has had such a high-profile national meeting there instead of Pyongyang.

"A floral basket in the name of Kim Jong-un was laid in front of the statue of the Chairman (Kim Jong-il)," it said.

Kim was accompanied by senior party officials, including his influential sister, Kim Yo-jong, at the event, as Ri Il-hwan, a member of the ruling party's powerful politburo, made a related report.

The KCNA did not mention if Kim delivered a message during the meeting.

It remains unconfirmed if Kim has also visited the landmark mausoleum of his father in the capital or will do so as usual for the anniversary.

Kim has paid tribute at the Kumsusan Palace of the Sun, where the late leader's body lies in state, every year since he took power in late 2011.

Pak did not attend a major parliamentary meeting held earlier this month after last appearing in state media accompanying the leader at an art performance marking Lunar New Year's Day on Feb. 1.

North Korea has been holding various events to mark this week's anniversary, with keen attention from the outside world on whether it will stage a large-scale military parade.

South Korea's military earlier said it detected signs of a possible military parade. However, it could be held on or near April 15th, which marks the 110th birthday anniversary of Kim's late grandfather and national founder, Kim Il-sung, given that it is still at the early stage of preparations.

The North says Kim Jong-il was born on Feb. 16, 1942, in a Samjiyon area located at the foot of Mount Paekdu. He ruled the country for nearly two decades and died in 2011. Developing the Samjiyon city has been one of Kim Jong-un's major goals since taking the helm of the North right after his father's death.

Last week, Kim said, "The work of sprucing up Samjiyon City was victoriously concluded as a gift of loyalty to the 80th birth anniversary of Chairman Kim Jong-il."

North Korea elevated the status of Samjiyon from a county to a city in 2019 and has called for transforming the area into the "wealthiest" region in the country. 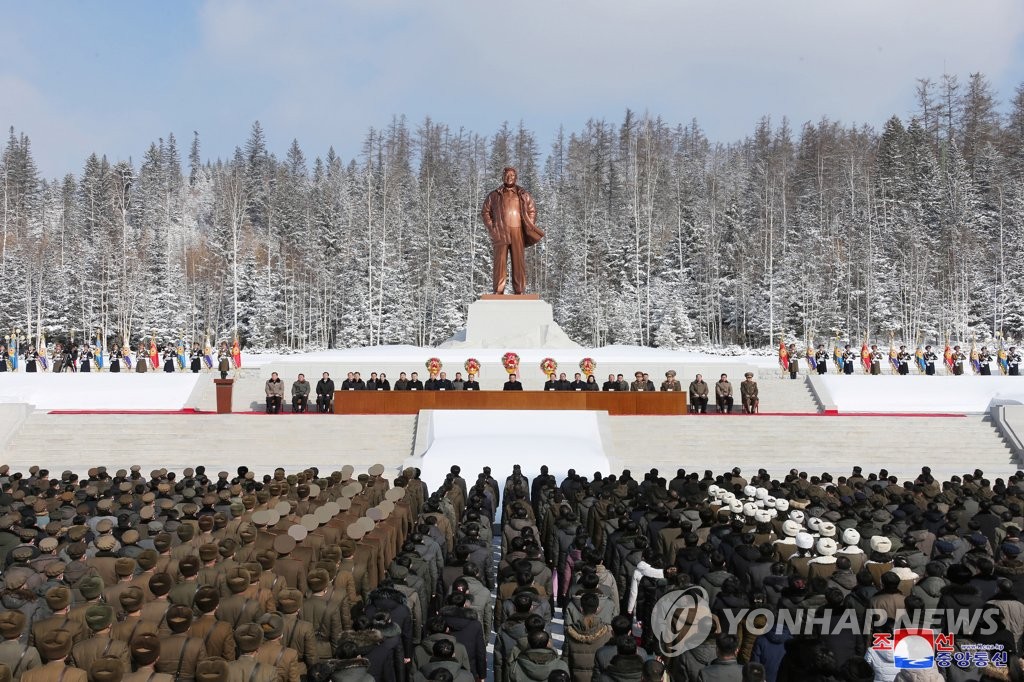