SEOUL, Feb. 17 (Yonhap) -- South Korea's daily COVID-19 cases exceeded 90,000 for the second straight day Thursday to hit another record high amid concerns that the peak of the current wave has yet to come amid the fast spread of the omicron variant.

The country reported 93,135 new COVID-19 infections, including 93,045 local cases, raising the total caseload to 1,645,978, according to the Korea Disease Control and Prevention Agency (KDCA).

The number of daily cases rose sharply Wednesday to surpass the 90,000 level for the first time ever, coming to 90,443 from the previous day's 57,164, with a majority of infections being caused by the omicron variant.

The daily tally nearly doubled in a week, and it grew by more than fourfold compared with two weeks ago.

As of 6 p.m. Thursday, health authorities and local governments had reported an additional 86,637 COVID-19 cases, up 9,388 from the 77,249 cases posted the same time the previous day, which was the largest-ever number for that time. 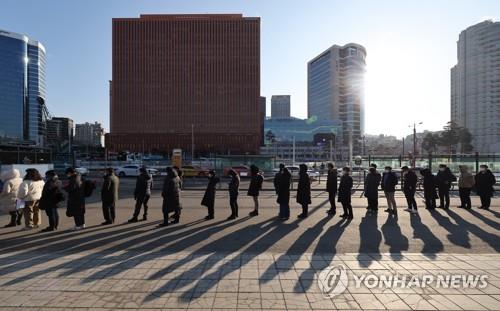 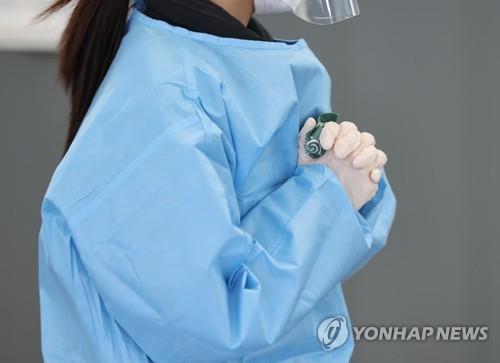 Health authorities presented a bleak outlook over COVID-19 cases, saying that daily infections could reach 170,000 by around the end of this month. A state-run science institute forecast that the figure could rise to as high as 360,000 early next month.

Professor Shim Eun-ha of Seoul's Soongsil University said that the current wave is expected to peak at around 270,000 in mid-March, some seven weeks after omicron became the dominant strain in South Korea.

Amid the spike in COVID-19 cases, the number of critically ill patients is also on the rise.

The number of seriously ill COVID-19 patients came to 389, up 76 from a day earlier and marking the fourth straight day that the tally stayed above 300. Health authorities have warned of a possible uptick in serious cases in a couple of weeks.

Intensive care unit beds for critically ill patients were 28.5 percent occupied nationwide. It has been at a stable level, but concerns over a possible shortage linger as the total infections have grown at a fast pace.

Currently, the country has a capacity of treating up to around 2,000 patients in critical condition, according to the KDCA.

Despite the unprecedented wave of infections, the government is reviewing an option of easing current strict social distancing rules due mainly to minimizing their impact on small businesses.

Under review is relaxing the current cap on private gatherings of six people and a 9 p.m. curfew on restaurants and cafes nationwide, while maintaining a vaccine pass system, which requires proof of vaccination or a negative test result to use certain types of public facilities.

"Our social distancing scheme aims to minimize critical cases and deaths, while preventing any overload on the medical system. We will make a decision on the possible adjustment after reviewing not only the number of daily infections but also related factors in a comprehensive manner," health ministry official Son Young-rae told reporters.

The government will announce whether it will ease the antivirus curbs Friday. 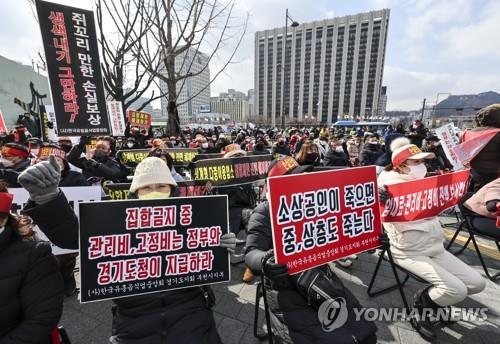 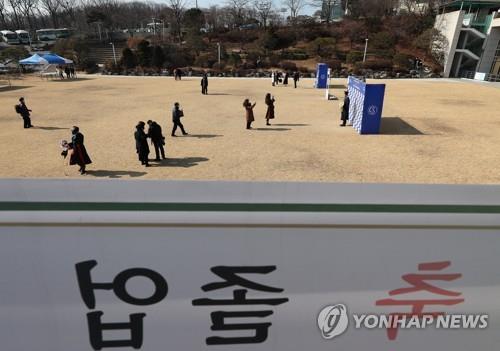 As of Thursday, 29.9 million people, or 58.3 percent of the country's 52 million population, had received booster shots. The number of fully vaccinated people came to 44.26 million, accounting for 86.2 percent, the KDCA said.

The country added one more death among teenagers following vaccination, as a 16-year-old male died last week after being fully vaccinated, bringing the total number of such cases among this age group to seven.

The KDCA said an investigation is under way to find any linkage between his death and the vaccination.

Of the locally transmitted cases reported Thursday, Seoul reported 19,678 new cases, and the surrounding Gyeonggi Province and the western city of Incheon added 28,438 and 7,235 new patients, respectively. Combined, the greater Seoul area accounted for 59.5 percent of the country's total infections.

The number of patients receiving at-home treatment also rose to a fresh high of 314,565 Thursday, topping 300,000 for the first time.

The KDCA earlier said that around 10 percent of the COVID-19 patients have received treatment at hospitals or community treatment centers, with the remainder being treated at home, a move to effectively handle the drastic surge in infections and to better focus on serious cases.