SEOUL, Feb. 20 (Yonhap) -- Presidential candidate Ahn Cheol-soo of the minor People's Party has said his campaign "will never stop" amid speculation over how his earlier proposal to merge candidacy with main opposition contender Yoon Suk-yeol will go.

Ahn returned to the campaign trail Saturday following three days of mourning after a local campaign chief and a bus driver died inside a campaign vehicle apparently from inhaling toxic gas from a generator powering an LED screen.

The deaths came just days after Ahn had offered to select a unified opposition candidate between him and Yoon through opinion surveys, sparking widespread speculation that he was preparing to drop out of the race.

But Ahn said his mind changed after the tragedy.

"I've made up my mind, thought and determination that their sacrifices should never be wasted in vain," Ahn said during a live YouTube session held under the title, "I will never stop," on Saturday evening after a day of campaigning.

"An Ahn Cheol-soo a week ago is totally different from Ahn Cheol-soo of now in terms of determination and resolution," he said. "Even though I'm doing this with a smile and a comfortable look on my face, my mind is harder than ever."

Ahn had proposed merging campaigns with Yoon on Sunday last week, saying the two sides should field a single candidate to ensure a victory against ruling Democratic Party presidential candidate Lee Jae-myung in the March 9 election.

Yoon and his People Power Party (PPP) have welcomed the idea of a merger, which has long been considered a potential game-changer in a remarkably tight presidential race where Lee and Yoon are running neck and neck at around 40 percent support each and Ahn is a distant third at around 10 percent.

But PPP officials balked at Ahn's proposal to choose a unified candidate through opinion polls, citing concern that such a system could produce distorted results if supporters of the ruling party pick a candidate that they believe their candidate matches up better against. 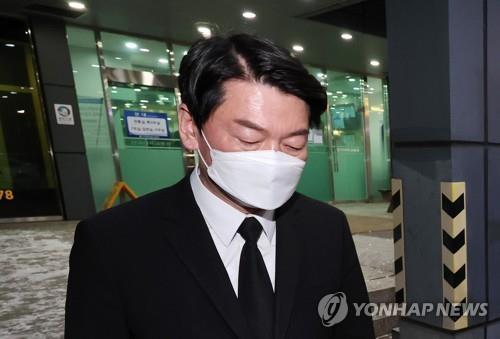