According to the courier union under the Korean Confederation of Trade Unions (KCTU), the more militant of the country's two major umbrella unions, around 2,000 workers held the demonstration against CJ Logistics in front of Cheonggye Stream in central Seoul.

Unionized CJ Logistics workers have been on a strike since late December, arguing the company has pocketed most of the profits from hikes in recent delivery charges while neglecting its responsibility to prevent unnecessary overwork, part of a deal between the government and the logistics industry reached last year.

In support of the striking workers, members of the KCTU courier union broke into and seized CJ's headquarters office on Feb. 10, and have since been staging a sit-in protest. 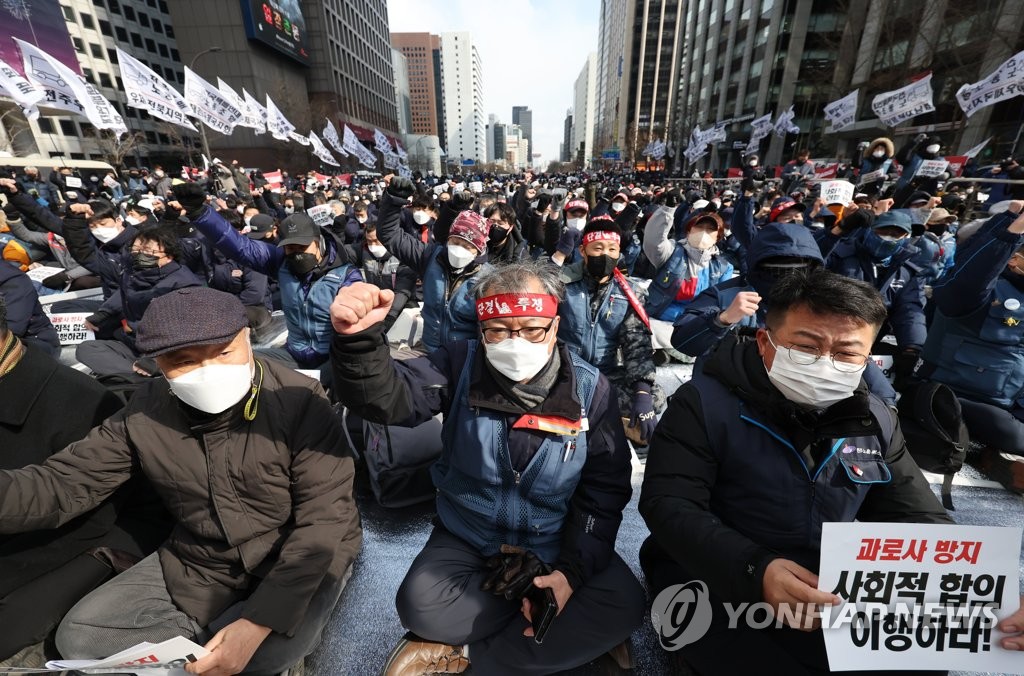 The company claims that workers occupying the building have violated COVID-19 rules, and has sued the union on charges of property damage and obstruction of business.

The union has designated Monday as a tentative deadline for CJ Logistics to agree to talks.

Jin Kyung-ho, head of the KCTU courier union, said at the rally that some 200 union members occupying the CJ Logistics building will end the sit-in protest, except for in the lobby, "in order to offer another opportunity for dialogue," but also threatened to launch a "larger sit-down strike" if CJ Logistics makes a "wrong judgment."

Jin also said he will begin an extreme hunger strike, foregoing even water and salt consumption.

Despite the recent surge in new virus cases, protesters got around the antivirus rules, which only allow for a rally of up to 299 people, by having an official campaign vehicle of Kim Jae-yeon, presidential candidate of the far-left Progressive Party, on the scene as campaign events are exempt from COVID-19 restrictions.

Unionized workers at other companies, including Lotte Global Logistics Co. and Hanjin Transportation Co., also launched a one-day walkout in a warning against CJ Logistics and in solidarity with striking workers. The union will also consider holding an industry-wide walkout unless CJ Logistics concedes to negotiations with its workers.