The country has reported an increase in the outbreak of ASF cases from wild boars in recent weeks, and a series of bird flu cases at local farms since November last year across the country. 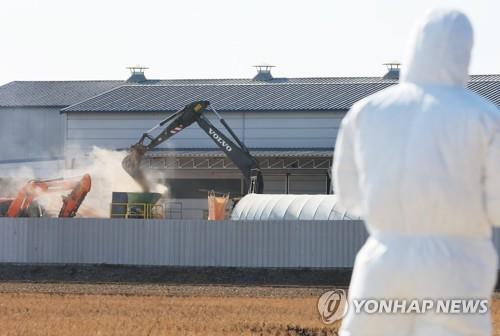 Swine fever has shown signs of spreading further to southern regions after being recently reported in the central and eastern areas. A total of 292 ASF cases have been reported so far this year.

In a move to prevent the spread of ASF, the government will intensify operations of hunting down wild boars and searching for affected animals, while installing more fences to stop their migration, according to the agricultural ministry.

It has also been enhancing disinfection measures at local farms and encouraging them to establish quarantine facilities by April.

To support the farms' facility expansion, the government earmarked 14.4 billion won (US$12.05 million) of budget this year, up from last year's 8.7 billion won, and plans to extend additional incentives to those who carry out thorough antivirus steps in advance, the ministry added.

"Chances of the disease affecting local farms are feared to rise starting in March due to increased farming activities and the growth in hikers, so thorough preparatory steps are required," the ministry said in a release.

ASF does not affect humans but is deadly to pigs. No vaccine or cure for the disease is now available.

The government also vowed to keep in place strengthened disinfection and other quarantine steps against avian influenza.

This winter season from Nov. 8 last year, the country saw a total of 44 bird flu cases at local farms, with the latest case being reported Saturday.

The outbreak has slowed down in recent days along with the return of migratory birds, but the government pledged to continue regular inspections, intensive disinfection, preventive culling and other strict measures across the country, the ministry said.

S. Korea to step up quarantine efforts against animal diseases

S. Korea to step up quarantine efforts against animal diseases