SEOUL, Feb. 21 (Yonhap) -- The National Assembly on Monday passed a 16.9 trillion-won (US$14.2 billion) extra budget bill aimed at mainly supporting pandemic-hit small merchants after weeks of wrangling between rival parties over its size.

The bill passed 203-1 during a plenary parliamentary session with 9 abstentions after the ruling Democratic Party and main opposition People Power Party agreed to add 2.9 trillion won to the 14-trillion won proposed by the government in January.

Under the bill, some 3.3 million small merchants and self-employed people will be entitled to receive 3 million won each in relief money starting Wednesday.

About 2.8 trillion won will be used to compensate restaurants, cafes and other multi-use facilities for their losses incurred by anti-virus measures, with payments scheduled to kick off during the first week of March.

Up to 1 million won per person will also go to taxi and bus drivers, low-income artists or other freelancers in the form of emergency support.

The supplementary budget, this year's first, will also cover the cost of COVID-19 self-test kits for 6 million vulnerable citizens and support freelance workers, artists and people of other occupations that were excluded from past relief programs.

The bill's passage comes two days after the DP unilaterally passed the budget proposal through the parliamentary budget committee, drawing strong protests from the PPP.

Despite what it called procedural flaws, the PPP reversed its position Monday and agreed to cooperate with the ruling party, citing the urgent needs of small merchants.

Critics have expressed concern both parties are using the extra budget to buy votes ahead of the March 9 presidential election.

In 2020, the country drew up four extra budgets totaling around 67 trillion won to cope with the COVID-19 pandemic. In May that year, the government doled out 14.3 trillion won in stimulus checks to all households.

The government plans to approve the extra budget at a Cabinet meeting Tuesday. 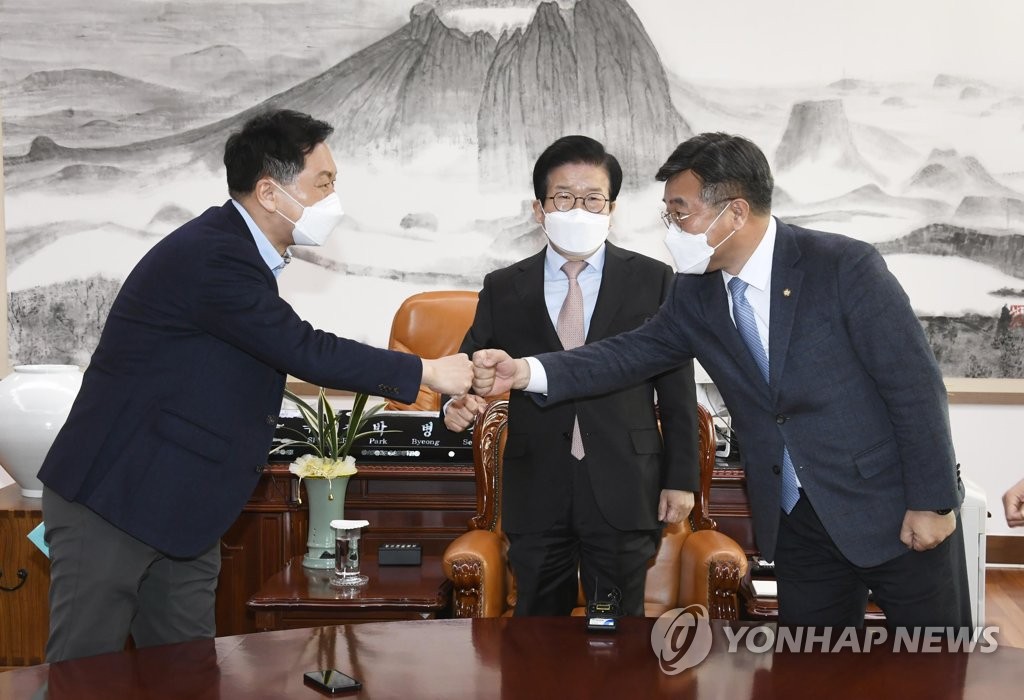