SEOUL, Feb. 21 (Yonhap) -- The U.S. Forces Korea (USFK) has completed the deployment of the newest Apache attack helicopters to South Korea, its aviation unit said, as the allies have stepped up joint efforts to counter Pyongyang's evolving military threats.

In a Facebook post last Friday, the 2nd Combat Aviation Brigade said that the process to deploy the latest AH-64E Version 6 helicopters to Camp Humphreys, a main USFK base in Pyeongtaek, 70 kilometers south of Seoul, was completed two days earlier.

It did not specify the number of helicopters, but the U.S. Army said on its website last month that a total of 24 helicopters would be deployed to South Korea through the end of this month in the first overseas delivery of the new version of the Apache aircraft.

"This AH-64E V6 is far superior to prior generations when you take into consideration its lethality, its survivability, its performance and its maneuverability," Lt. Col. Peter Schmitt, commander of the 4-2 Attack Helicopter Battalion under the 2nd Combat Aviation Brigade, was quoted as saying.

In November, the Pentagon announced the results of its global defense posture review, which included a decision to permanently station a previously rotational Apache attack helicopter unit along with artillery division headquarters in South Korea. 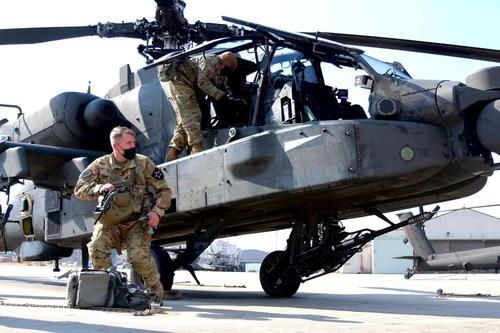