The two-hour debate, also involving Ahn Cheol-soo of the minor opposition People's Party and Sim Sang-jeung of the minor progressive Justice Party, opened with the candidates addressing their plans for overcoming the economic crisis induced by the novel coronavirus pandemic.

Lee of the ruling Democratic Party promised he will fully compensate small businesses by drawing up extra budgets or issuing emergency executive orders, while Yoon of the main opposition People Power Party urged swift compensation but also emphasized fiscal soundness of the government. 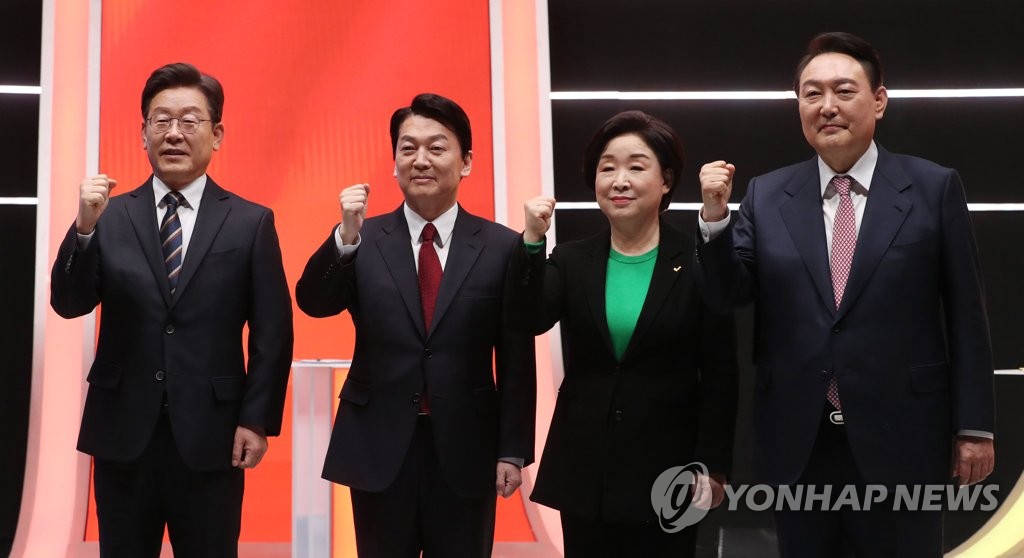 During the debate, Lee and Yoon, the front-runners for the March 9 election, frequently traded punches, starting with the passage of an extra budget bill.

"When there is a fire, you need to put it out quickly, rather than complaining about the size of the bucket," Lee criticized of Yoon's PPP for delaying approval of the bill.

Yoon criticized the DP for ramming the bill through a parliamentary committee.

While Lee raised a stock manipulation allegation against Yoon's wife, Yoon asked for an explanation of a corruption scandal surrounding an apartment development project conducted in Seongnam, south of Seoul, during Lee's time as mayor of the city.

Speaking of the direction of the next government's economic policy, Lee said he will focus on solving unfairness issues to spur growth, while Yoon stressed fostering a digital, data-based economy.

Ahn called for scrapping regulation and investment in science technologies. Sim vowed to solve inequality and shift to a "green economy."

Monday's debate was the first of three TV debates required by law and hosted by the National Election Commission (NEC), the state election watchdog. The four main candidates have already held two rounds of additional debates.

The NEC-hosted presidential debates are also scheduled take place Friday and on March 2 with a focus on politics and social issues, respectively.