SEOUL, Feb. 23 (Yonhap) -- South Korean Foreign Minister Chung Eui-yong expressed deep concerns over Japan's move to have a mine linked to the forced labor of Koreans listed as a world heritage site in a meeting with UNESCO chief in Paris on Tuesday (local time), his ministry said.

Chung held a 40-minute meeting with UNESCO Director-General Audrey Azoulay in Paris, where he is visiting for the Indo Pacific Ministerial Forum 2022. 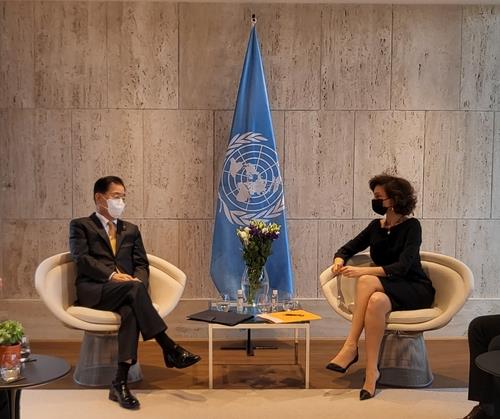 Tokyo announced its bid to have the Sado mine listed as a UNESCO world heritage site earlier this month.

Seoul has filed a protest against the Japanese move, noting Tokyo has failed to fulfill its pledge to offer full public information on the forced labor of Koreans at its existing UNESCO heritage sites, including Hashima Island mine, which was listed in 2015.

Azoulay said UNESCO fully understood Seoul's concerns over the Sado mine and that it will also continue to work to have Japan honor its 2015 pledge to make public the information on the forced labor of Koreans, according to the foreign ministry.

Chung earlier called for regional efforts to address disputes over historical issues while speaking at the ministerial forum, hosted by Paris. 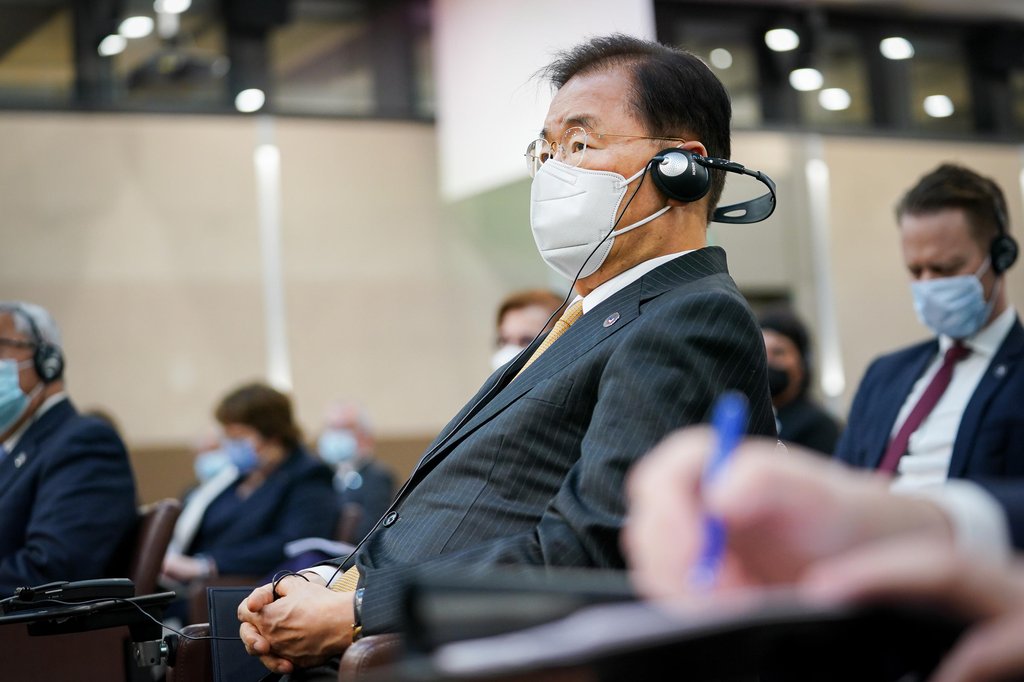 "(We) may be able to learn from Europe's experience of overcoming differences over history to reach reconciliation and unity through multilateralism and apply such experience to promoting regional cooperation in the Indo-Pacific region," the minister was quoted as saying by his office.

Relations between the Asian neighbors have worsened, especially since mid-2019 when Japan placed restrictions on exports of high-tech materials to South Korea following Seoul court decisions on forced labor during Japan's 1910-45 colonial rule of the Korea Peninsula.

The top diplomat also reaffirmed Seoul's commitment to engage with North Korea and asked for continued support from the EU and Indo-Pacific partners.

Chung said that the North Korean nuclear issue poses a threat to peace and security far beyond the Korean Peninsula, as Pyongyang continues to advance its nuclear and missile capabilities.

"We have to accelerate efforts to bring North Korea back to the negotiating table," he insisted.

On the sidelines of the Paris conference, Chung held back-to-back meetings with foreign ministers from Sweden, Bulgaria, Romania and Greece to discuss ways to boost bilateral ties, the ministry said.
(END)