SEOUL, Feb. 23 (Yonhap) -- South Korea's new COVID-19 infections soared to hit another high of over 170,000 on Wednesday, nearly doubling from a week earlier, as the highly contagious omicron variant continued to spread across the country.

The country reported 171,452 new COVID-19 infections, including 171,271 local cases, raising the total caseload to 2,329,182, according to the Korea Disease Control and Prevention Agency (KDCA).

This marked a drastic surge from the previous day's 99,573 and is far higher than the previous record of 104,814 tallied Sunday. 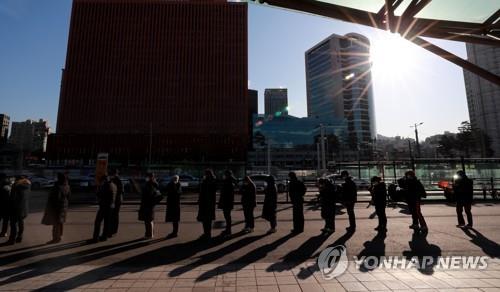 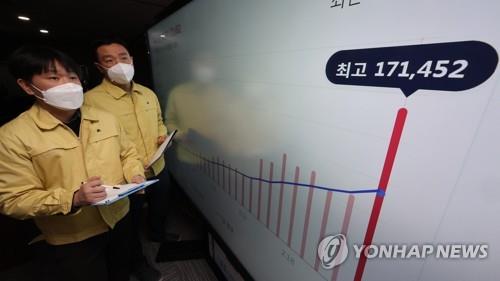 Behind the surge lies the fast spread of the omicron variant, which became the dominant variant in South Korea late last month. The daily tally nearly doubled in a week, and it grew nearly fourfold compared with two weeks ago.

The number of critically ill COVID-19 patients came to 512, up 32 from a day earlier. The figure has been on a rise recently, climbing from around 200 cases early last week to over 400 on Saturday and further to more than 500 on Wednesday.

The death toll from COVID-19 came to 7,607, up 99 from Tuesday. It is the fourth-highest number of daily deaths from the new coronavirus. The fatality rate was 0.33 percent, according to the KDCA.

The health authorities have said that the omicron wave could reach a peak by early next month with the daily caseload rocketing up to 270,000. Experts also forecast that serious cases would jump to more than 1,000 by that time.

The upsurge in total infections also pushed up the number of patients receiving at-home treatment to an all-time high of 521,294. The figure more than doubled in a week, and could surpass 1 million next week, according to KDCA officials.

Amid the omicron wave, the country adopted an enhanced at-home treatment system to better focus on serious cases and vulnerable people. 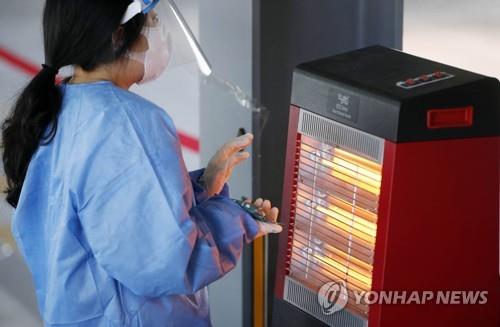 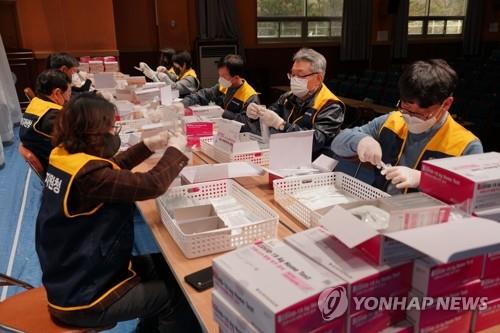 But Prime Minister Kim Boo-kyum said there is "no reason" to have fears over the number of virus patients, as the country's medical response system is well established and the fatality rate caused by the omicron variant remains low.

"Although omicron is heading to its peak, we plan to revise our social distancing and other measures once we judge that serious cases and deaths can be controlled stably," Kim said, presiding over a COVID-19 response meeting on Wednesday.

Last week, the government partially eased antivirus curbs by extending the business hour curfews for cafes and restaurants by one hour to 10 p.m., though it maintained the six-people cap on private gatherings and other curbs.

"In the short run, an upsurge in total infections does pose risks. But the spread of the omicron variant with a lower fatality rate could be a positive factor for the return to pre-pandemic life," health ministry official Son Young-rae told a regular briefing.

As of Wednesday, 30.74 million people, or 59.9 percent of the country's 52 million population, had received booster shots. The number of fully vaccinated people came to 44.32 million, accounting for 86.4 percent, according to the KDCA.

The government has called on more people to get vaccinated to stave off the current wave, saying that the fatality rate of the omicron variant falls to that of seasonal flu, or around 0.08 percent, for those who receive a booster shot.

The drug safety agency on Wednesday approved the use of Pfizer's COVID-19 vaccine for children aged 5-11 after monthslong deliberation.

The country has seen a growing number of infections among young people, with the proportion of the patients aged 18 and younger rising to 27.6 percent last week.

The government plans to come up with detailed inoculation plans by next month, and consultations are under way with Pfizer about the shipping schedule, a KDCA official said.

The vaccine is used for children of this age group in 62 countries, including the United States, the European Union and Britain.

As medical workers and health officials have been stretched thin, the government has mobilized some 6,500 officials for virus-related tasks recently, such as supporting at-home patients.

It also plans to send more officials to public health centers and local government offices for supportive roles at the earliest possible date, the KDCA said. 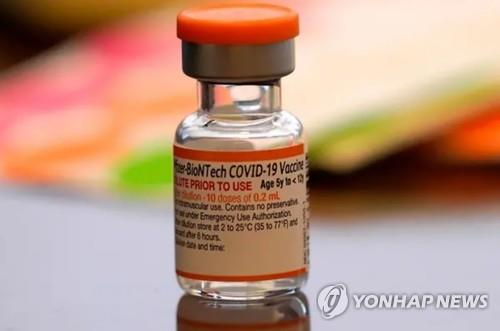