The video passed the 700 million threshold at 9:31 a.m., about nine months after it was uploaded online on May 21 last year, the group's agency Big Hit Music said.

The upbeat summer song became a global hit upon its release, staying on the Billboard's Hot 100 main singles chart for 10 non-consecutive weeks.

The song's music video earned 108.2 million views in its first 24 hours, giving it the biggest first-day view count of all time on YouTube.

Including "Butter," a total of 35 music videos for BTS songs have garnered more than 100 million views and 10 of them over 700 million.

Videos for "DNA" and "Boy With Luv" recorded over 1.4 billion views each, while "Dynamite" attracted more than 1.3 billion views. 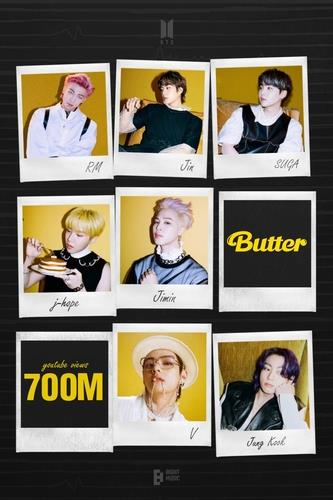