The South Korean government has said the Ukraine crisis may have limited impacts on its economy, but industry watchers voiced concerns that the deterioration of the situation could dampen supplies of crude oil and raw materials, and dent the country's exports.

Earlier in the day, Russian President Vladimir Putin authorized what he called a special military operation in eastern Ukraine despite the international community's pleas and warnings.

The United States on Tuesday imposed sanctions on several Russian banks and individuals for the Kremlin's order for its troops to enter eastern Ukraine, calling the move "the beginning" of an invasion and a "flagrant violation of international law." President Moon Jae-in said Thursday Seoul will participate in international sanctions against Russia. 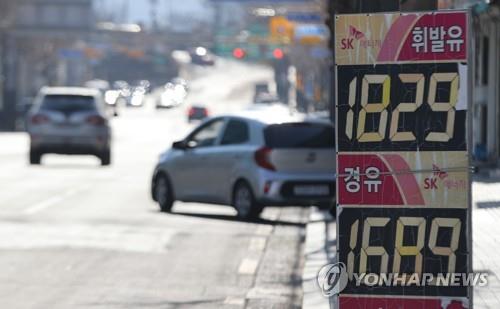 Russia is one of the world's biggest suppliers of crude oil, natural gas and refined products. Oil prices spiked to over US$100 a barrel Thursday, and power and coal prices have also risen recently.

South Korean businesses have paid close attention to the development of the unfolding crisis as high energy costs will likely have far-reaching impacts on their business operations. South Korea heavily relies on imports for its energy needs.

Naphtha is South Korea's biggest import item from Russia at 25.3 percent, followed by crude oil at 24.6 percent, coal at 12.7 percent and natural gas at 9.9 percent, according to the Korea International Trade Association (KITA).

The country's petroleum and refinery companies, including SK Innovation and S-Oil, may log higher inventory profits in the short term. But the prolonged tensions could shrink global demand, potentially hurting their bottom lines, experts said.

The country's cement industry, which imports nearly 75 percent of its bituminous coal from Russia, particularly voiced concerns that the geopolitical unrest will drive prices up further and disrupt supply.

"The recent tension between Russia and Ukraine has caused a demand and supply imbalance, pushing up prices," an official from the Korea Cement Association said.

The cost of producing cement went up 30-50 percent compared with the first quarter of last year, he added. 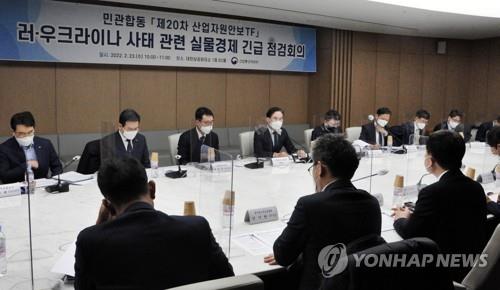 Korean chipmakers are closely watching the development of the crisis as they import neon gas and krypton, key raw materials needed to produce chips, from the region.

South Korea imported 23 percent of its demand for neon gas from Ukraine and 5.3 percent from Russia last year.

Lee Jae-yun, an analyst from Yuanta Securities, said in a report that the ongoing tensions could cause a supply crunch for such raw materials, potentially lifting chip prices.

"This could ultimately result in a price hike for consumer electronics and IT devices," the report showed.

The same concern is echoed by other analysts, including Lee Woong-chan from Hi Investment & Securities Co.

He said while South Korean chipmakers rely more on China than on Ukraine for neon, 67 percent versus 23 percent, chipmakers will not be able to avoid price increases in case the tension intensifies.

Samsung Electronics Co. and SK hynix Inc., the world's two largest memory chip suppliers, said there was no immediate impact of the Russia-Ukraine crisis on their chip production and that they were monitoring the situation.

The car industry is not spared from feeling the potential effects either.

South Korean automakers could face increasing risks from volatility of the Russian currency and see shrinking demand in Russia due to Western-imposed sanctions.

Unfavorable exchange rates led to lower earnings of Hyundai Motor Co. and its affiliate Kia Corp. in 2014, when Russia seized the Crimean Peninsula, the report by Yuanta Securities said.

Hyundai Motor said there was no direct impact of the current crisis on its operations in Russia. The carmaker has local car assembly lines in St. Petersburg, where it produces around 230,000 cars a year.

According to the Korea Automobile Manufacturers Association, Hyundai sold 38,161 cars and Kia sold 51,869 cars in Russia last year. The combined volume is around 4.5 percent of South Korea's total auto exports.

KITA said it has set up an emergency team to deal with the Ukraine crisis and minimize any economic fallout from the military confrontation in the region.

The trade association said it will continue monitoring the situation and consult with the government on any negative impacts of the unfolding crisis on South Korean businesses with exposure to Russia. 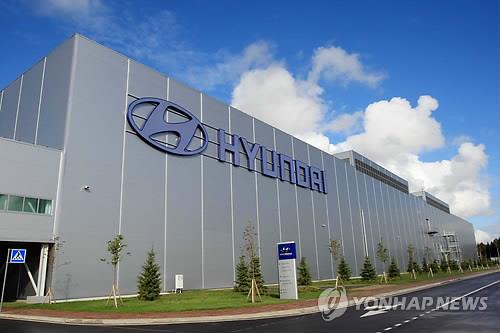