SEOUL, Feb. 24 (Yonhap) -- Russia's attack on Ukraine this week could be a reminder of the grim reality for North Korea: A deal to bargain away its nuclear arms could prove to be a scrap of paper anytime in a world of power politics.

Defying warnings and pleas, Russian President Vladimir Putin has recognized two breakaway regions in eastern Ukraine as "independent" states, ordered the dispatch of "peacekeeping" troops there and then initiated a military operation.

The strongman's military step is now rekindling a debate over the fate of the 1994 Budapest Memorandum under which the United States, Russia and Britain pledged to offer security assurances to Ukraine in return for its handover of all Soviet-era nuclear weapons. 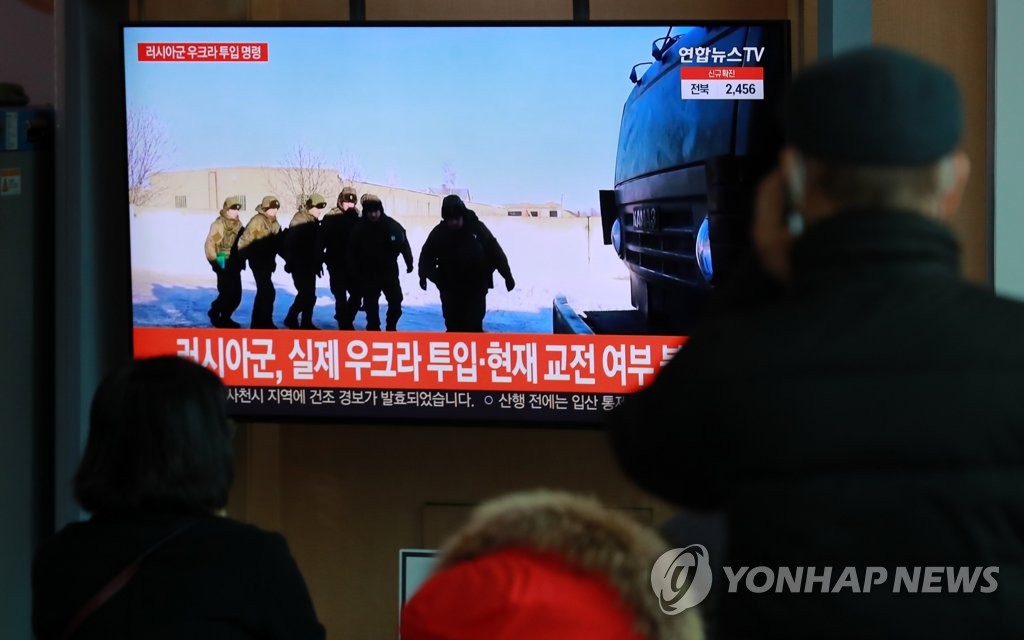 For Pyongyang, the unfurling crisis in Ukraine might be a grim indication that any future denuclearization deal -- whether that be with Washington or Beijing -- could be as fragile as the Budapest Memorandum, observers said.

"The Ukraine crisis will be yet another historical lesson for North Korea: A weak country is likely to face such a scenario after all," Park Won-gon, professor of North Korean studies at Ewha Womans University, said.

"In fact, the North's position has long been that security assurances from major powers are futile, and that is a reason why it has sought to bolster self-reliant capabilities and build its own nuclear force," he added.

The military conflict in Ukraine came as nuclear negotiations between Washington and Pyongyang have been stalled since the summit between the two countries in Hanoi in 2019 ended without a deal.

The North's nuclear quandary has long eluded U.S. administrations partly because the recalcitrant regime has remained doubtful whether any American promises of security assurances can be credible and will remain unaffected by a change of government inherent in a democracy.

The North's such doubts were reinforced when former U.S. President Donald Trump withdrew Washington in 2018 from the landmark 2015 Iranian nuclear deal signed under his predecessor, Barack Obama.

This week's attack harks back to Russia's 2014 annexation of the Crimean Peninsula, which was then cited as an ominous sign that the Budapest arrangement was hanging by a thread.

The 2014 redrawing of the European map and the current Ukrainian crisis have unnerved the U.S. and other allies as they see the two cases as a body blow to the long-held principle: National borders should not be altered by military force.

Amid growing signs of the principle's erosion, the North has gone overboard to sharpen its military edge through a series of advanced missile tests last month, including those of hypersonic and intermediate-range ones.

Pyongyang has also appeared keen on reinforcing its nuclear weapons capabilities, casting them as the "treasured sword." It has expressed a desire to develop tactical nuclear arms while doubling down on diversifying delivery vehicles.

"As North Korea watches the encroachment on the territorial integrity of Ukraine in the annexation of the Crimea and the ongoing crisis, the regime would find it difficult to abandon its nuclear program, which is like an insurance policy for the North," Kim Tae-hyung, professor of international politics at Soongsil University, said.

For South Korea, what's happening there may not be something it can write off as a faraway crisis. Beyond its potential economic fallout, the security crisis poses a major geopolitical question of whether to allow what could be a breach of a key international rule: noninterference.

On Thursday, an official at Seoul's foreign ministry warned South Korea would join anti-Russia sanctions should Moscow escalate the standoff into a full-blown war.

The U.S. and its allies have imposed coordinated retaliatory sanctions targeting Russian officials and two key banks while warning of tougher measures to be rolled out in case of further escalation.

"Should Russia set off a full-scale war in any format despite the international community's repeated warnings, our government has no other option but to join arms control measures against Russia," the official said on condition of anonymity.

His remarks marked a nuanced shift from Seoul's earlier show of cautiousness on the sanctions issue that had apparently reflected its consideration of multifaceted partnerships with Moscow.

A senior official at the presidential office Cheong Wa Dae said Wednesday that Seoul is not considering military support or deployment in connection to the Ukrainian crisis.

"Major Western nations have expressed a willingness to join in sanctions. We are also looking at this while leaving various possibilities open," the official said, requesting anonymity.

As the Joe Biden administration has been striving to rally its regional allies and partners against an assertive China and a nuclear-ambitious North Korea, Beijing, Moscow and Pyongyang have appeared to be closing ranks with one another.

For Beijing and Pyongyang, however, the unfolding situations in Ukraine could be a worrisome development given that both have ardently championed the principle of noninterference -- a term they often use to criticize America.

"From the North's perspective, the Russian order to send troops into Ukraine might be an act against its anti-imperialist credo," Park of Ewha Womans University said. "For China that has balked at any acts to meddle in internal affairs, it could be an embarrassing one too."