SEOUL, Feb. 24 (Yonhap) -- The nominee for new CEO of Kakao Corp., the operator of South Korea's top mobile messenger KakaoTalk, vowed on Thursday to boost the company's stock price back to over 150,000 won (US$125) within his term following a sharp plunge amid a series of mishaps.

Namkoong Whon was named to head the tech giant in January after a former CEO nominee resigned over controversial sell-off of stock options. Namkoong will be officially named CEO during a board of directors' meeting slated for March. 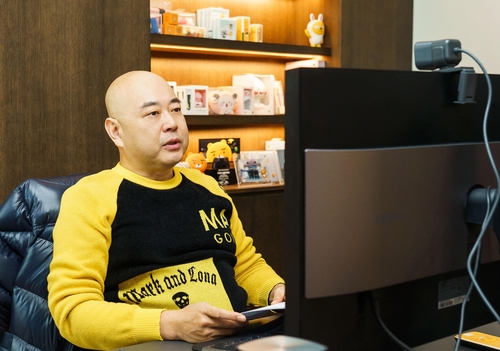 "I wish to restore Kakao's stock price to 150,000 won within my term (of two years)," Namkoong said during an online press conference. "I believe it is a possible goal once the market is stabilized in some degree."

Namkoong earlier said he earn around the minimum wage until Kakao's share price reaches the 150,000 won-level.

The nominee also said he requested the condition that his stock option can only be exercised when the price of a Kakao share passes the 150,000 won-level.

Ryu, who has served as the chief of Kakao's payment arm, Kakao Pay, was named to lead the tech giant on November of last year.

Ryu, however, came under criticism after he, along with other senior executives, sold around 90 billion won worth of Kakao Pay shares by exercising their stock options on Dec. 10. They collected around 46.9 billion won in profit.