SEOUL, Feb. 24 (Yonhap) -- A pyramid scheme ring has been apprehended for allegedly luring victims to invest a total of 130 billion won (US$108 million) in virtual coins for fake business opportunities disguised as projects tied to K-pop supergroup BTS and other cultural products, authorities said Thursday.

The Seoul metropolitan government's special police bureau for public safety said it has booked eight suspects affiliated with an unspecified virtual coin company for reaping unfair profits by selling the coins to some 30,000 people between February and July of last year.

The ring allegedly operated 163 centers and 15 branch offices across the country, targeting mainly seniors, retirees and housewives under a pyramid scheme to bolster the number of coin purchasers.

The suspects were alleged to have lured investments by deceiving the victims that the coin was tied to a Seoul city tour package endorsed by BTS and another project tied with the popular South Korean animated series "Pororo the Little Penguin."

According to authorities, the coin in question was listed in an international coin exchange in the Philippines, but its price crashed due to weak trading. 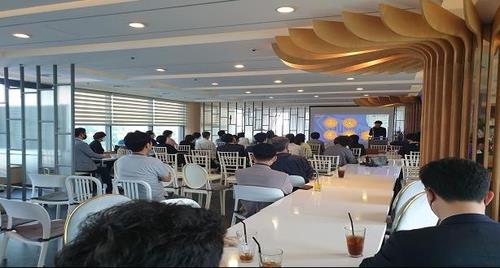