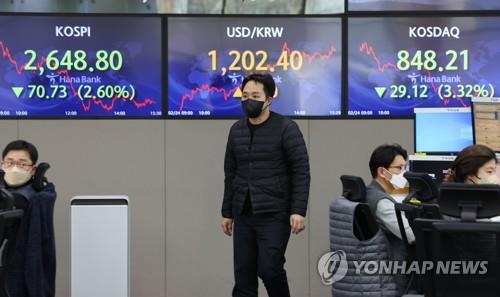 Stocks opened sharply lower, taking a cue from stock plunges on Wall Street that stemmed from military tensions in Ukraine.

Stock losses deepened at home and around the world in the afternoon, briefly touching the intraday bottom of 2,642.63 points, after reports Russian forces attacked targets across Ukraine.

Earlier in the morning, the Bank of Korea froze the benchmark seven-day repo rate at 1.25 percent, citing fallouts from the pandemic and the Ukraine crisis.

The local currency closed at 1,202.4 won against the U.S. dollar, down 8.8 won from the previous session's close.

Bond prices, which move inversely to yields, closed higher. The yield on three-year Treasurys lost 9.1 basis points to 2.226 percent, and the return on the benchmark five-year government bond fell 9.9 basis points to 2.423 percent.