SEOUL, Feb. 24 (Yonhap) -- South Korea's government said Thursday it has set up emergency contact lines with Korean companies operating in Russia and opened a counseling office for exporting firms to minimize impacts Moscow's military operation against Ukraine could have on the country's industry sector.

Some 120 South Korean companies are currently operating in Russia, and the government established hotlines with them to provide necessary support amid escalating tensions in the region, according to the Ministry of Trade, Industry and Energy.

A total of 43 South Korean nationals who had been in Ukraine for business purposes were all evacuated safely earlier in the day, the ministry added.

The ministry also opened the so-called Russia desk in charge of offering counseling services to Korean exporters on international sanctions expected to be imposed on Russia and other legal support.

U.S. President Joe Biden has warned of "severe sanctions" against Russia, and South Korea vowed to join the move.

South Korea's exports to Russia and Ukraine are relatively low, but geopolitical tensions are feared to have an adverse impact on its industry and economy in the long term, given the country's export-driven growth structure and heavy reliance on imports for key materials. 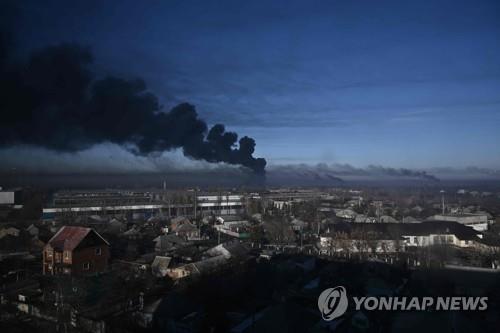 The government also beefed up monitoring of the country's supplies of energy, crops and other necessary items amid a possible upsurge in global oil and other energy prices.

Currently, South Korea holds a crude stockpile that could last for 106 days, or around 97 million barrels, so as not to face a shortage in their short-term supplies.

It is considering releasing strategic crude reserve if necessary, it added.

"Despite sudden changes in the security situation in Ukraine, we've seen no unusual moves or signs that could cause a major impact on the economy. We will be fully prepared for any contingencies," the ministry said in a release.

Earlier in the day, Russian troops reportedly launched attacks on Ukraine after President Vladimir Putin authorized what he called a special military operation despite international calls for a peaceful resolution of the crisis.