SEOUL, Feb. 25 (Yonhap) -- Samsung Electronics Co. said Friday it has released its Galaxy S22 smartphones and Galaxy Tab S8 series in South Korea and some 40 other countries, including the United States.

On Feb. 10, the world's largest smartphone maker unveiled its flagship Galaxy S series fitted with stronger chips, eco-friendly features and upgraded camera performance that overcomes some of the challenges of shooting at night.

Samsung Electronics said its latest product series saw more preorders within the first week than any other Samsung smartphone and tablet to date.

In South Korea, preorders, which ran from Feb. 14-21, came to 1.02 million units. The company did not disclose data on global preorders.

Among the three, the Ultra model was the most popular, taking up more than 60 percent of the preorder volume, Samsung said. The model comes with a built-in S Pen for the first time for a Galaxy phone, effectively succeeding the Galaxy Note line.

Samsung used recycled plastic materials, such as discarded fishing nets, as parts for the Galaxy S22 series, to expand the use of eco-conscious materials and make its business more environmentally friendly.

The company said it will further expand sales of the Galaxy S22 smartphones and Galaxy Tab S8 series to some 130 countries by mid-March. 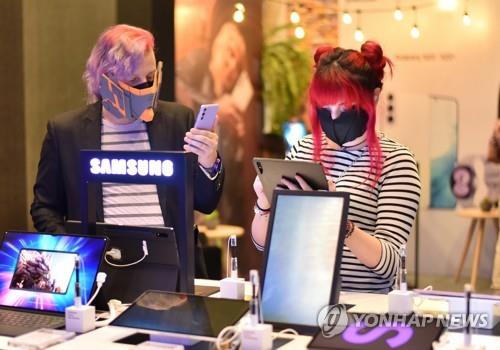