SEOUL, Feb. 25 (Yonhap) -- Britain's top envoy here has made an emphatic call for South Korea and other partner countries to "collectively raise the cost" for Russia's "unacceptable" invasion of Ukraine this week, welcoming Seoul's decision to join anti-Moscow sanctions.

In an exclusive interview with Yonhap News Agency on Thursday, Ambassador Colin Crooks commented on Russia's multipronged attack on the pro-West neighbor, lambasting it as "terrible acts."

"We have to show President (Vladimir) Putin and his regime that these activities are completely unacceptable," Crooks said in his first media interview since his arrival here earlier this month for the ambassadorship.

"We have to collectively raise the cost Russia has to pay," he added, portraying the current conflict as a "very dangerous and sad moment" for the world. 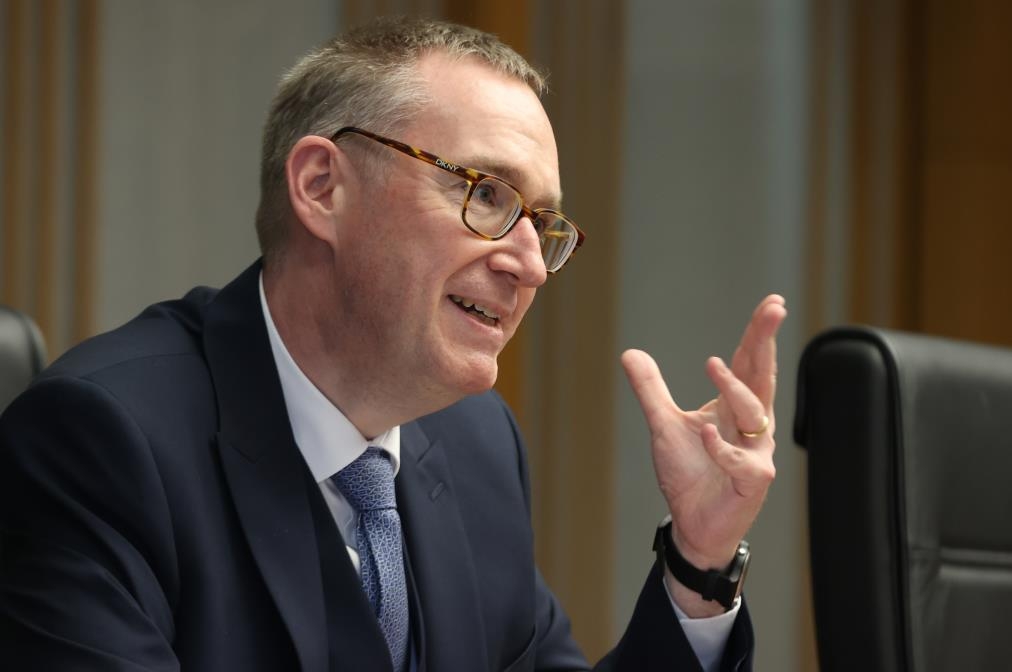 Britain has closely been consulting with several other nations, including South Korea, to coordinate joint responses and sanctions against Russia, according to the ambassador.

"We are working with all of our partners around the world, freedom-loving countries like Korea, to uphold the rights of Ukraine like any other country," he said.

His remarks came after Seoul announced a plan to join international sanctions against Russia.

Fluent in Korean, Crooks is the first British ambassador who served in both Koreas, which are still technically at war. The 1950-53 Korean War ended only with an armistice, not a peace treaty.

Crooks is known for his regular Twitter posts about life in one of the world's most secretive states during his stint in Pyongyang from December 2018 and May 2020. He is the last British national to set foot in the North as it imposed stringent border controls due to COVID-19.

The diplomat now looks forward to playing a role in promoting peace on the Korean Peninsula by sharing his experience of growing up in Northern Ireland, which suffered about an ethno-nationalist conflict from the late 1960s to 1998.

"The situation in North Korea is obviously very different, but there are some points that I think are the same," he said. "There is a need for dialogue, a need for tolerance, a need for negotiation."

Touching on his time in Pyongyang, Crooks recounted his encounters with North Koreans yearning for a "brighter future around the corner" following a whirlwind of summit diplomacy surrounding the two Koreas, the United States and China in 2018.

That hope, however, faded after the Hanoi summit between former U.S. President Donald Trump and North Korean leader Kim Jong-un collapsed without a deal in February 2019, he said.

"I think that the North Korean regime missed a huge opportunity at Hanoi. They had an opportunity there to do a deal which would have guaranteed their security and their prosperity," he said. "Instead, they mishandled the Hanoi summit."

Despite Pyongyang's reluctance to reengage since then, Crooks said Seoul should leave open the door for dialogue and Britain is ready to leverage its diplomatic capacity to play a bridging role between the two Koreas.

But in the meantime, international sanctions on the North should be in place as part of engagement efforts toward the ultimate goal of the denuclearization of the Korean Peninsula, he said.

"Sanctions are a part of the negotiation and part of the discussion. And this all has to do with a framework of denuclearization," he said. "I can't see that the lifting of sanctions right now would help."

Crooks expressed concerns over human rights in North Korea due to pandemic-driven restrictions that have aggravated its already weak economy.

The envoy wanted to see the North cooperate with the U.N. to receive COVID-19 vaccines and address challenges in medical infrastructure to vaccinate its people and get ready for reopening its economy.

"Their tight border closure has come at a very heavy cost to North Korean people and their economy," he said. "I worry about the humanitarian situation in North Korea."

Peace efforts aside, Crooks looks forward to contributing to deepening economic relations between South Korea and Britain given South Korea was among the first countries to sign a new free trade deal with Britain following London's exit from the European Union in 2020.

Having served in the Korean embassy in the late 1990s, Crooks was impressed by South Korea's transformation to a "more confident" country with a vibrant economy, advanced technologies and popular culture loved by the world.

During his service here, the ambassador wants to contribute to improving the two countries' people-to-people ties through his active public diplomacy, and Twitter will be intrinsic to that endeavor, he said.

"Coming back to South Korea was my long-held dream," a smiling Crooks said in fluent Korean. "It's my second home."