SEOUL, Feb. 25 (Yonhap) -- Russia's invasion of Ukraine has propelled national security issues to the fore of South Korea's presidential campaign as the two front-runners have seized on the crisis to highlight their own visions for defending the country and peace.

The competing claims from the leading presidential candidates came as the Ukraine crisis has underscored the security challenges South Korea faces against a provocative and nuclear-armed North Korea across its border.

Ruling party candidate Lee Jae-myung of the liberal Democratic Party framed the issue on Thursday as a choice between peace and war and pointed to falling South Korean stock prices as an example of how war will impact the economy. 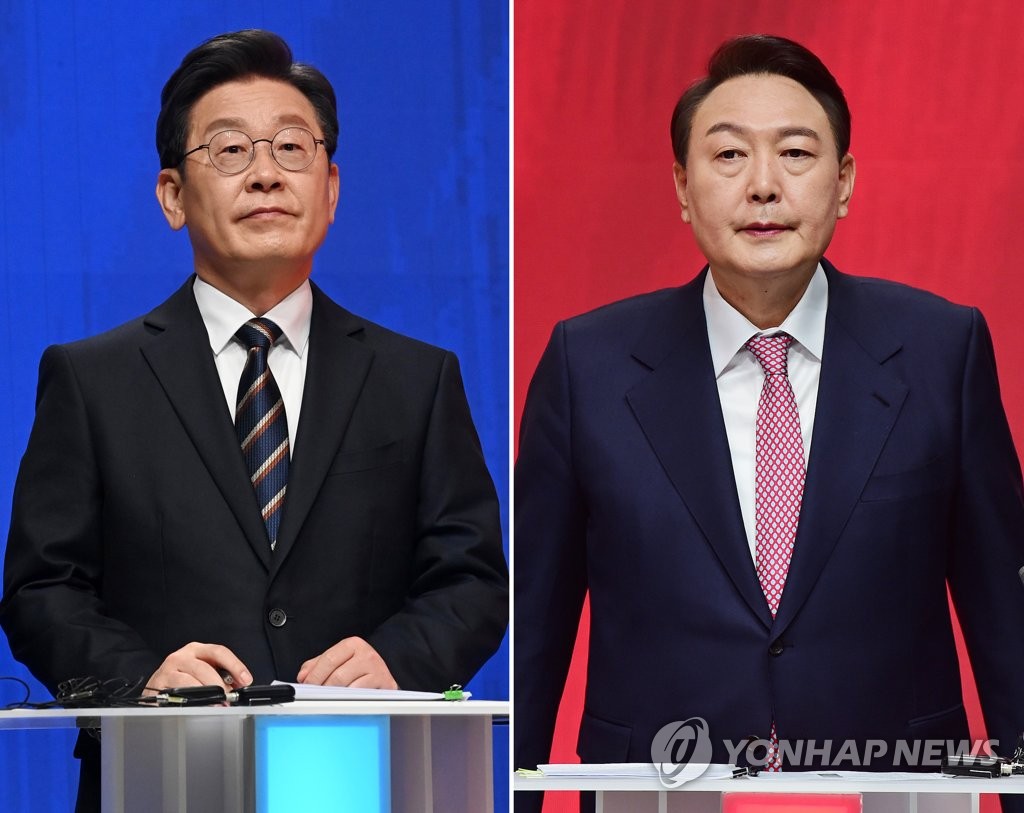 "What a leader must do at all costs is defend the peace," he said during an emergency party meeting convened to discuss the conflict.

"Politicizing national security through issues such as THAAD deployments and preemptive strikes only brings crisis upon oneself," he said.

Lee has repeatedly accused main opposition candidate Yoon Suk-yeol of the conservative People Power Party of putting the country in danger by pledging to deploy additional units of the U.S. THAAD antimissile system in South Korea and suggesting a preemptive strike on North Korea.

During the meeting, he called for emergency support measures for South Korean businesses affected by the conflict and its resultant economic sanctions on Russia as he sought to promote himself as a president competent in economic affairs.

"If our stock prices are falling because of Ukraine, what would happen to our economy if tensions rose on the Korean Peninsula?" he said during a campaign rally earlier that day.

Yoon doubled down on his approach to national security, which centers on defending "peace through strength," saying only strong deterrence through a firm South Korea-U.S. alliance will allow the country to determine its own fate.

"I, Yoon Suk-yeol, will strengthen the South Korea-U.S. alliance and build peace through strength," he wrote on Facebook on Thursday, claiming the conflict in Ukraine demonstrated the plight of a nation without an ally.

Yoon called for making thorough preparations with the U.S. to be ready in the event North Korea launches a provocation against the South in the midst of the crisis surrounding Ukraine.

"An end-of-war declaration and peace treaty in word only does not guarantee peace on the Korean Peninsula by any means," he wrote, referring to the Moon Jae-in administration's peace initiatives for the North. "A memorandum that is not backed by strength is meaningless."

Yoon took his criticism further during an emergency party meeting later in the day.

"(The government) must let go of its obsession with the end-of-war declaration and pursue a practical foreign policy strategy that will stop North Korea's provocations and stabilize the Korean Peninsula, based on the South Korea-U.S. alliance and strong cooperation with the international community," he said.

"The reality of international foreign affairs and national security is harsh," he added. "The Republic of Korea must also make a level-headed choice."

Both Lee and Yoon cleared their public schedules on Friday to prepare for their TV debate later in the day.

Yoon still took to Facebook to reaffirm the importance of a strong defense posture and a firm alliance with the U.S. in light of the situation in Ukraine.

"I feel reassured once again by the (presence of) U.S. Forces Korea and the South Korea-U.S. Mutual Defense Treaty," he wrote.

Yoon also rejected the opposition of militant labor unions and some women's groups to the allies' combined military exercises, saying they are "essential" for deterring the North and keeping peace in Northeast Asia.

"I, Yoon Suk-yeol, will make sure the views of the Republic of Korea are respected by the international community by strengthening the South Korea-U.S. alliance and standing together with liberal democracies," he said.