SEOUL, Feb. 25 (Yonhap) -- The four main presidential candidates faced off Friday over a range of national security issues, including nuclear-sharing arrangements and the U.S.-led missile defense system, as they jostled for position during their fourth televised debate.

The two-hour debate was held under the theme of politics and featured candidates Lee Jae-myung of the ruling Democratic Party, Yoon Suk-yeol of the main opposition People Power Party, Ahn Cheol-soo of the centrist People's Party and Sim Sang-jeung of the progressive Justice Party. 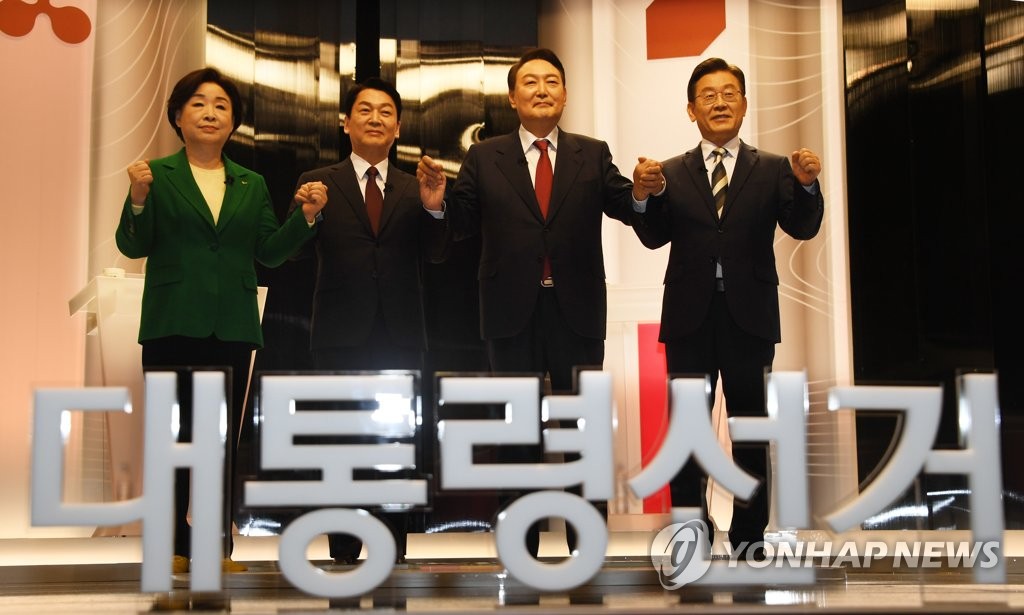 Lee asked Yoon if he still hoped to redeploy tactical nuclear weapons to the Korean Peninsula as stated early in his campaign, but the PPP candidate denied ever making such an argument.

The two front-runners have clashed repeatedly over national security issues, especially in the wake of Russia's invasion of Ukraine, with Lee calling for creating the conditions conducive to peace and Yoon advocating for a "peace through strength" approach.

Ahn also disagreed with Yoon on the effectiveness of U.S. extended deterrence in responding to North Korea's nuclear and missile threats, saying he believes South Korea should enter into a nuclear-sharing arrangement.

When asked by Sim if he sees the need for South Korea to join the U.S.-led missile defense system, which has long been viewed as a threat by neighboring countries, such as China and Russia, Yoon responded affirmatively.

"If supersonic and hypersonic missiles are developed, I believe a missile defense system between South Korea and the United States might be needed to respond," he said.

The candidates also discussed the DP's proposal for political reform, which centers on ensuring the political participation of minor parties and fostering national unity by revising the Constitution to change the single five-year presidential term to a renewable four-year term.

Ahn questioned the DP's sincerity in putting forth the proposal with only days to go until the March 9 election, saying the "key" is to pass it through a plenary meeting of DP lawmakers.

When asked by Sim if the possibility of a candidacy merger remained open between Ahn and Yoon, Ahn insisted it was over.

Yoon, meanwhile, was cautious to go into detail, saying "we are also working on it."

The possibility of a Yoon-Ahn merger has continued to hang over the race, as it could break the current tie in polls in favor of Yoon, with Lee and Yoon currently neck and neck at around 40 percent support each.

Friday's debate was the second to be hosted by the National Election Commission, the state election watchdog.

The third and final debate will be held on March 2 on the theme of social issues.