SEOUL, Feb. 27 (Yonhap) -- Samsung Electronics Co. said Sunday it will showcase a new lineup of goods from flagship smartphones to laptops during the upcoming global technology trade fair in Spain.

The Mobile World Congress (MWC) 2022 is set to take place from Monday to Thursday in Barcelona. It is one of the top three annual tech events in the world, along with the Consumer Electronics Show in the United States and the IFA in Germany. 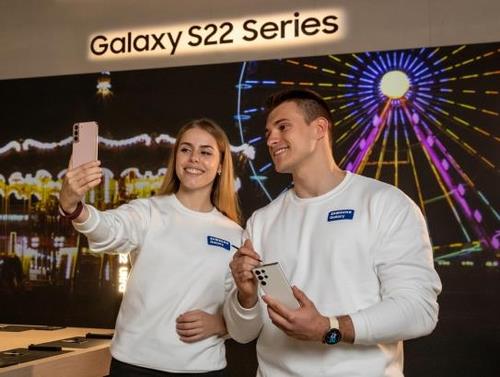 First, Samsung will hold the virtual "Samsung Galaxy MWC Event 2022," which will be available for anyone to watch on the tech giant's YouTube channel.

Samsung will showcase the next-generation Galaxy Book laptop for the first time. No concrete specs for the laptop have been released, but Intel Corp. is mentioned as a partner.

Samsung Electronics said the new laptop will offer a "seamless experience across devices and operating systems" with various different Galaxy devices working together.

At the MWC, Samsung Electronics will also showcase its other lineup of products, such as Galaxy S22 smartphones and Galaxy Tab S8 series.

Earlier, the world's largest smartphone maker unveiled its flagship Galaxy S series fitted with stronger chips, eco-friendly features and an upgraded camera performance that overcomes some of the challenges of shooting at night.

Samsung used recycled plastic materials, such as discarded fishing nets, as parts for the Galaxy S22 series, to expand the use of eco-conscious materials and make its business more environmentally friendly.
(END)