SEOUL, Feb. 28 (Yonhap) -- Civic activists and ordinary citizens held a rally in front of the Russian Embassy in central Seoul on Monday to condemn Russia's invasion of Ukraine and to call for a peaceful resolution of the situation.

Activists representing about 400 civic groups, including People's Solidarity for Participatory Democracy and the Korean Confederation of Trade Unions, urged Moscow to stop its attack on Ukraine and the international community to swiftly provide humanitarian support to Ukrainians.

Also in attendance were about 100 Ukrainians and South Korean citizens, including those who used to live in Ukraine. They held up signs reading "Stop War," "Give Peace a Chance" and "Withdraw Russian Troops Now," along with Ukrainian flags. 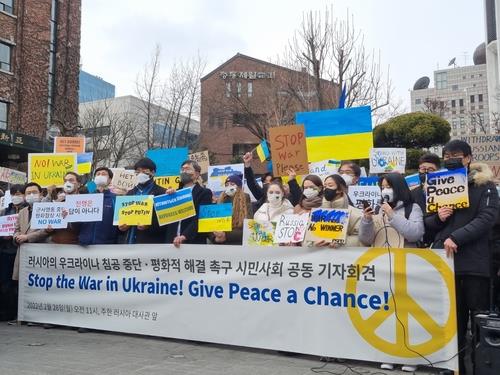 "Russia's invasion of Ukraine is an act disregarding the international society's yearslong effort to resolve the conflict between two countries in a peaceful manner," they said. "All conflict of interest related to national security must be peacefully resolved through democracy."

The civic groups delivered a statement calling for peace in Kyiv, written in Korean, English and Russian, to the Russian Embassy after the news conference.

Civic groups in the southwestern city of Gwangju also denounced Russia's invasion and urged the South Korean government to take all possible diplomatic measures to help bring peace to Ukraine. 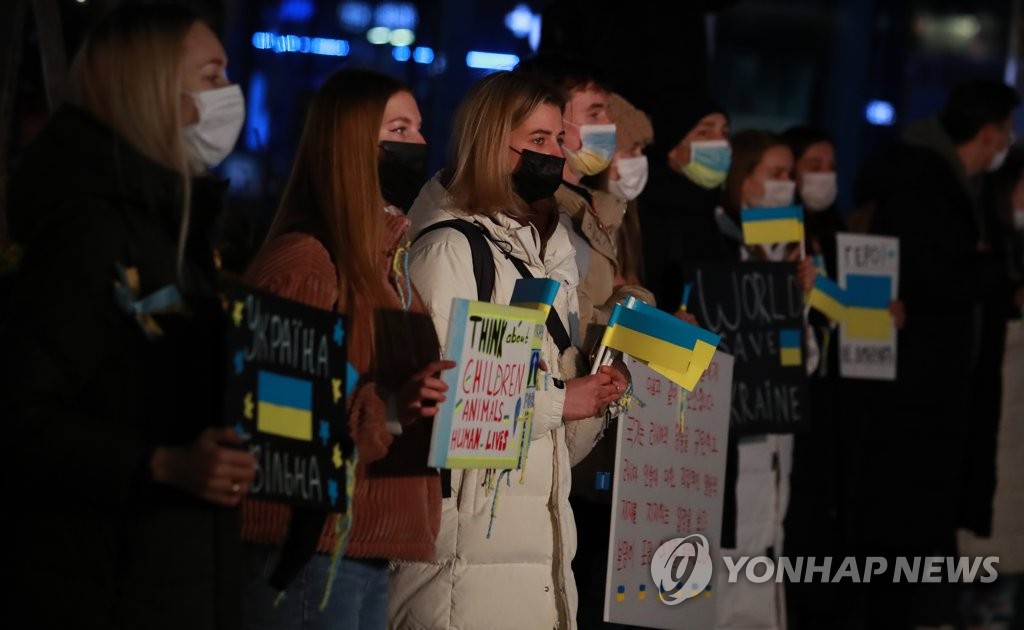 In the southeastern port city of Busan, a South Korean man was stopped by police while attempting to break into the Russian Consulate General office at 10:40 a.m..

The man in his 50s reportedly said he was trying to deliver an anti-war message. No clash erupted between him and police officers.

Following the incident, police stepped up security and increased patrols around the Russian mission.

About 30 Ukrainians, including students, residing in the city staged a rally near Haeundae Beach at 7 p.m. They condemned Moscow's invasion and urged the world to support Ukraine and pressure Putin to stop the war.