SEOUL, Feb. 28 (Yonhap) -- European aircraft maker Airbus expects a spike in demand for new aircraft from South Korea and other Asia-Pacific countries in the next two decades as cargo flights and passenger travels will rebound after a pandemic-caused slowdown, an Airbus executive has said.

Fabrice Espinosa, Airbus' chief representative for Korea, made the projection, adding airlines in the region are expected to outpace their peers in other areas in terms of orders, given recent signs of passenger traffic recovery.

"Our long term confidence in this region prevails," he told Yonhap News Agency in a recent interview. "In fact, we expect that airlines in the Asia-Pacific region will need 17,620 new aircraft (passenger and freighter) over the next 20 years."

The figure represents 45 percent of the global demand forecast to be about 39,000 new aircraft deliveries through 2040. This will be driven by average growth in passenger traffic of 5.3 percent a year -- higher than any other region, he said. Besides the recovery in passenger traffic, he also expected the global boom in air cargo shipment will help push up the overall demand for new aircraft.

Cargo demand, in particular, has been on the rise bolstered by growing e-commerce amid increased "untact" shopping, which he expects will translate into demand for about 2,440 freighters over the next two decades, of which 880 will be newly-built.

He, however, did not provide the breakdown of the projected regional orders, only saying Airbus "is in regular talks with all our customers."

"Consumer patterns have changed dramatically in recent times, generating increased demand for the swift transport of cargo by air," he said.

The European aircraft maker expects the Asia-Pacific region will account for over a quarter of those newly produced freighter aircraft, needing some 230 aircraft.

The Asia-Pacific region is a key market for Airbus, as it accounts for a third of its revenue, the company said. Airbus saw its sales rise 4 percent on-year to US$59.4 billion last year.

"We are committed to our ongoing presence in the region and to growing further our footprint," said Espinosa. "Korea is one of the most important elements in that regional footprint. Not only in terms of our commercial success but also as partners."

"Both companies fully meet the high standards required by Airbus in terms of quality, cost and on-time performance. Airbus will continue to explore avenues to deepen our collaboration with such partners to bring greater value to our supply chain," he said.

In 2015, Korean Air placed an order for 30 A321neo passenger jets, with the delivery originally scheduled to begin in 2019. But the pandemic caused a two-year delay of the planes. 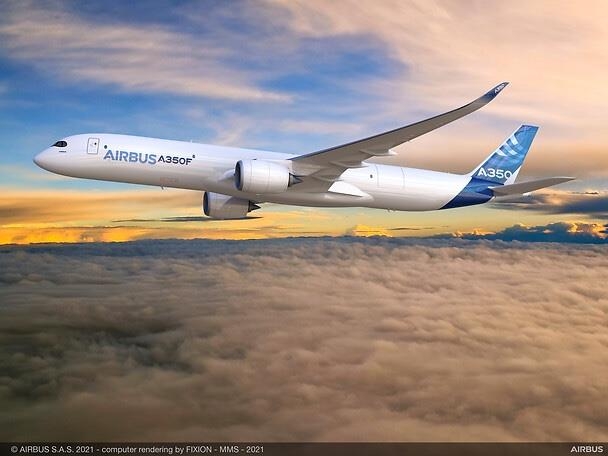 This year, Airbus sees continued market recovery in most regions and expects to deliver 720 passenger and cargo planes globally, up from its 611 deliveries last year.

However, recovery in the Asia-Pacific region still lags other key markets, such as Europe, North America and the Middle East, as strict border controls and quarantine measures are only being partially lifted, Espinosa said.

"What we see in those (Asia-Pacific) places that have started to ease restrictions is the tremendous appetite for people to fly again, reconnect with families and friends, and to restart business," the French native said.

Unlike other regions, long range flying is a key element of the air transport system in Asia-Pacific, with very long distances even within the region and in many cases no alternative to flying, he said.

When it comes to its long-term goals, Airbus said it aims to achieve carbon neutral aviation with a stepped-up drive.

It begins with replacing older aircraft with the latest planes that offer fuel savings of up to 25 percent. The next step will be to increase the use of sustainable aviation fuel (SAF), which will reduce life-cycle emissions by up to 80 percent, the company said.

SAF is not made from fossil fuel but from waste products and environment-friendly materials. It can be blended with jet fuel to reduce carbon emissions.

Korean Air said last week it will adopt SAF on the Incheon-Paris route, though it did not provide a fixed timeframe for the use.

The fuel only accounts for 0.1 percent of the global jet fuel due to higher production costs, lack of production facilities and supply chains.

Airbus said it wants to see the ratio in its aircraft to increase to 100 percent by 2030.

"The ultimate goal is to make a zero emission aircraft a reality. We are looking at various concepts and developing partnerships across the ecosystems (that include airlines, regulators, airports and energy providers) to make this happen," he said.