Customs-cleared outbound shipments stood at US$53.91 billion last month, up from $44.71 billion a year earlier, according to the preliminary data compiled by the Ministry of Trade, Industry and Energy.

It is the highest figure for February since the ministry began compiling related data in 1956. It also marked the first time that the country's exports volume surpassed the $50 billion mark in February. The previous record was set in February 2012, when the corresponding figure came to $46.3 billion.

Imports jumped 25.1 percent to $53.07 billion, also the highest for any February due mainly to soaring global energy prices.

Dubai crude, South Korea's benchmark, soared to $94.10 per barrel in February on average, up more than 50 percent from $60.89 a year earlier. South Korea depends on imports for most of its energy needs.

Despite the spike in imports, the country was still able to post a trade surplus of $840 million in February, a turnaround from the previous two months of a trade deficit.

"The country had faced unfavorable conditions both at home and abroad last month, such as the spread of the COVID-19 omicron variant, high raw materials prices and tensions surrounding Ukraine. But the solid growth in exports offset rising imports, which led to an improvement in the trade balance," the ministry said in a release.

February marked the 16th consecutive month that the country's exports have marked an on-year expansion. Exports also posted a double digit growth for the 12th month in a row last month. 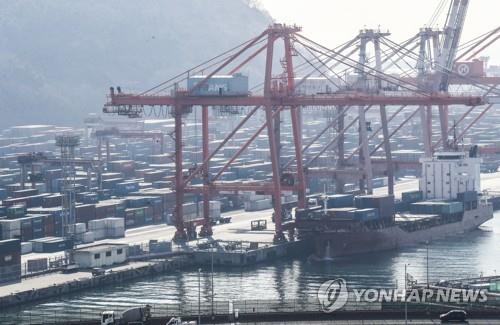 Shipments of the country's major export items increased in February, with sales of high-value memory chips rising 24 percent to $10.38 billion and autos moving up 9.1 percent to $3.84 billion.

The bio-health sector's sales also rose 24.7 percent amid the continued pandemic across the world, the data showed.

By nation, exports to China went up 16 percent on-year to $13 billion last month, and shipments to the United States also expanded 20.9 percent to $7.74 billion over the cited period, according to the data.

Exports bound for the Commonwealth of Independent States (CIS) surged 45.6 percent to 1.3 billion in February. Russia accounted for around 73 percent of South Korea's total exports to the CIS region, but tensions between Russia and Ukraine only had limited impacts on trade, the ministry said.