SEOUL, March 1 (Yonhap) -- Ruling party presidential candidate Lee Jae-myung on Tuesday strongly condemned Russia's invasion of Ukraine, saying it is shocking that a U.N. Security Council member carried out such an incursion in direct violation of the U.N. Charter.

Lee said the government should join sanctions against Russia while "carefully taking care of the safety and interests of businesses and people."

"Even though Russia is very close economically and geographically, we should join the international community in efforts to actively impose sanctions against the act that not only damages the market economy order but also does serious harm to the international economy," he said.

These hard-line remarks came after Lee came under fire for appearing to blame Ukrainian President Volodymyr Zelenskyy for provoking Russia to invade the country with his decision to join NATO while calling Zelenskyy a "novice politician."

Lee made the controversial remarks during a TV presidential debate Friday while trying to underscore the political inexperience of main opposition candidate Yoon Suk-yeol of the conservative People Power Party. 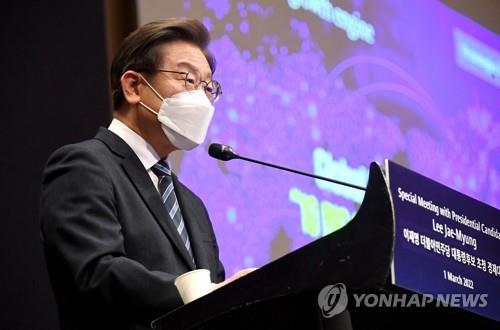