SEOUL, March 1 (Yonhap) -- Yoon Suk-yeol, the presidential candidate of the main opposition People Power Party (PPP), on Tuesday found himself in hot water after posting a photo of an angry face drawn on a tangerine along with a supporting message for Ukraine.

The photo of the "angry tangerine" was posted on Yoon's Twitter account with a message that read, "We stand with Ukraine." But it was deleted three hours later following criticism that it appears to make fun of the Ukraine crisis.

"A campaign worker uploaded the photo, thinking of the Orange Revolution in Ukraine (in 2004), but deleted it later after worrying that it can be used in domestic politics," a PPP official said.

The ruling Democratic Party slammed Yoon over the photo, calling it "humiliation for the country."

"We are just shocked that a South Korean presidential candidate came up with this post against common sense, while others are wishing peace and safety for Ukrainian people who are in the horrendous situation," said DP spokesperson Jeon Yong-gi. 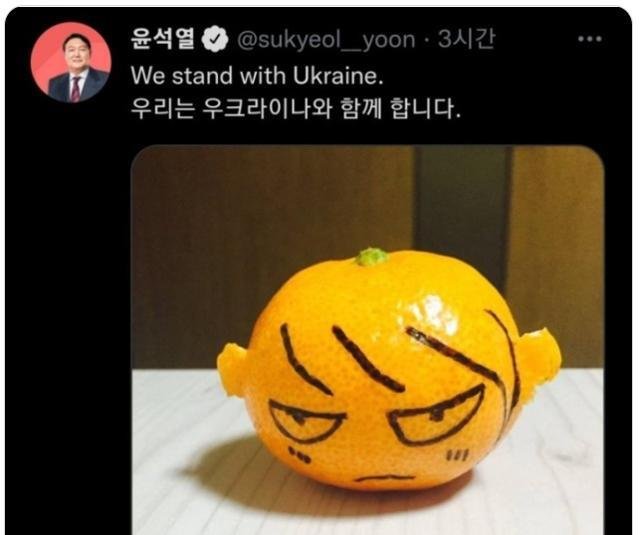 Yoon's campaign also deleted a photo of his dog watching his apartment door with the national flag to mark the anniversary of a 1919 uprising against Japan's 1910-45 colonial rule. The photo was uploaded with a message that read, "Today is March 1. We hung the national flag. Long live independence of Korea."

But after people pointed out the photo is reminiscent of Yoon's earlier controversial photo with his dog, the PPP officials decided to delete it.

Last October, Yoon drew fire after a photo of his dog being fed an apple sparked speculation that he likened the people to a dog following a reluctant apology for making insensitive remarks about a former dictator Chun Doo-hwan.

In Korean, "apology" and "apple" are homonyms, and the fact that Yoon's dog Tory was given the fruit only hours after the candidate issued a public apology led to criticism that Yoon was insincere in his apology and dismissed the people as dogs.

Yoon criticized over photo of 'angry tangerine' with pro-Ukraine message

Yoon criticized over photo of 'angry tangerine' with pro-Ukraine message