Kim made the remarks at an emergency session of the U.N. General Assembly held in New York on Tuesday (New York time), as dozens of other speakers urged Russia to stop its military attacks on Ukraine.

"The U.S. and the West, in defiance of Russia's reasonable and just demand to provide it with legal guarantee for security, have systematically undermined the security environment of Europe by becoming more blatant in their attempts to deploy attack weapon systems while pursuing NATO's eastward expansion," Kim said.

The comments came as Washington is rallying allies and partners to impose "devastating costs" on Russia, including its isolation from global financial and trade systems to hold Moscow accountable for the invasion.

At the U.N. session, the chief of the South Korean mission to the U.N., Amb. Cho Hyun termed the ongoing conflict in Ukraine a "war of choice" by Russia, and vowed his country will provide additional humanitarian assistance to the people of Ukraine. 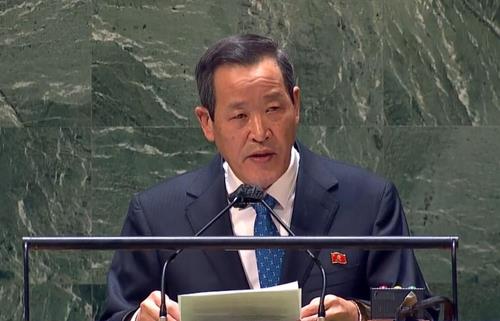