SEOUL, March 3 (Yonhap) -- Ahn Cheol-soo of the minor People's Party on Thursday dropped out of the presidential race and declared his support for main opposition candidate Yoon Suk-yeol following a surprise last-minute agreement to merge candidacies.

The deal came on the eve of early voting ahead of the March 9 election and is expected to boost Yoon's chances in a tight race where he is running neck and neck with ruling party rival Lee Jae-myung of the liberal Democratic Party (DP) within the margin of error.

"Both of us, Ahn Cheol-soo and Yoon Suk-yeol, agreed to combine our minds for a better change of the government," Ahn said during a joint news conference with Yoon of the conservative People Power Party (PPP). "I, Ahn Cheol-soo, decided to support candidate Yoon Suk-yeol." 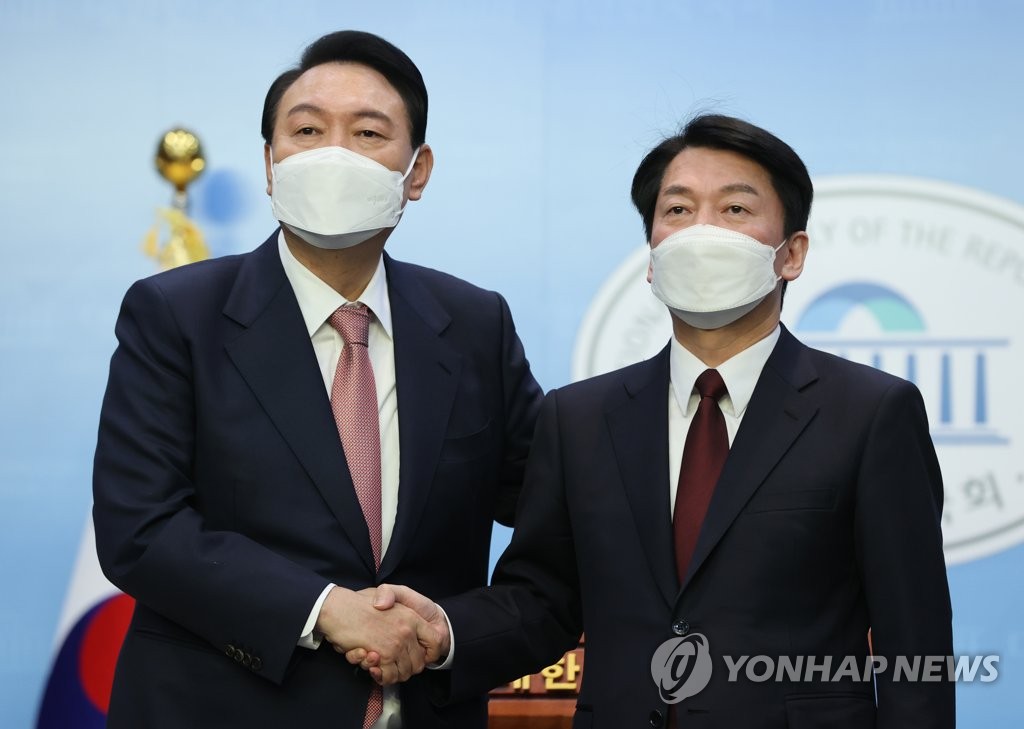 Yoon said he will honor Ahn's wishes and win the election "without fail" in order to jointly create a "successful government of national unity."

The agreement also called for a merger of the two parties immediately after the election.

"We will achieve a change of government without fail, and following only the wishes of the people, prepare for an era of grand transformation for change and innovation in the Republic of Korea," the two said in the agreement read by Ahn.

"We will consult on everything from the makeup of the transition committee to the makeup of the joint government and meet the wishes of history and the people," he said, leading to speculation Ahn could be given a senior position in the government if Yoon wins the election.

The agreement was reached when the two held a surprise meeting in the wee hours earlier Thursday.

"The two candidates met for about 2 1/2 hours from shortly after midnight until nearly 3 a.m. and agreed on these measures," a PPP official told Yonhap News Agency.

"They agreed to merge candidacies and parties without any conditions to honor the wishes of the majority of the people who wish for a change of government," the official said.

The two had been under pressure from conservatives to merge their campaigns but repeatedly clashed over the method, with Ahn initially proposing an opinion poll to pick a unified candidate.

But the PPP balked at the idea, citing the large gap in public support for the two candidates and the possibility of a distortion in the survey results. Specifically, the PPP expressed concern Lee's supporters could pick Ahn over Yoon in the survey to increase Lee's chances of winning the election.

Ahn then withdrew his offer and vowed to finish the race on his own.

Speaking to reporters after the press conference, Ahn said he believed it was right to "follow a great cause even if it brings personal losses."

On a possible role in government after the election, he said he would continue to contemplate "what role will truly help the people."

Later Thursday, Ahn submitted a request to withdraw his candidacy to the National Election Commission, the state election watchdog.

The DP denounced the merger, saying it is no more than "collusion aimed at sharing positions."

Rep. Woo Sang-ho, the chief of the DP campaign committee, made the comment to reporters after an emergency leadership meeting, adding that the committee will move to a 24-hour emergency footing to respond "in full force."

"The people of the Republic of Korea are wise," he said. "They have watched the process unfold until now, and we expect them to pass strict judgment." 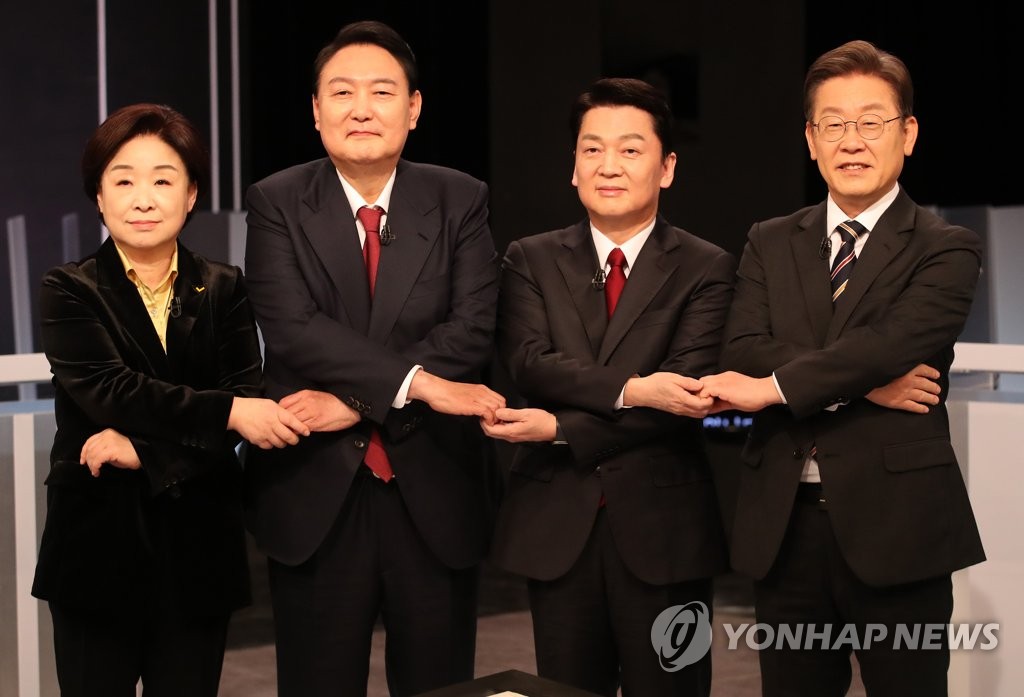 Lee resolved to soldier on.

"Politics appears to be done by politicians, but in fact, it is done by the people," he told reporters after a meeting with the archbishop of Seoul, reading from prepared remarks.

"I trust history and the people. I will steadfastly walk the path of people's livelihoods, peace and unity," he said.

Sim Sang-jeung, the presidential candidate of the minor Justice Party, said in a radio interview it was "regrettable" that Ahn changed course and that she felt an "emptiness in my heart."

She later held a news conference and expressed her disappointment at having lost the opportunity to work with Ahn to end "two-party politics."

"As (Ahn) expressed his conviction for political reform and his will for multiparty coalition government, I hope he will not abandon that conviction even if he merges with the People Power Party," she said.

The extent to which the merger will affect the election is still uncertain as ballots have already been printed and the votes of Ahn's supporters could spread among the remaining candidates.

Yoon and Lee have been neck and neck at around 40 percent support each, while Ahn has had around 10 percent.

According to a survey conducted by Embrain Public from Monday to Wednesday, Yoon led Lee 47.4 percent to 41.5 percent in the hypothetical scenario of Yoon merging campaigns with Ahn.

By law, opinion polls that are conducted within six days of the election, or starting Thursday, cannot be published until after voting closes.