The two nations began talks on a strategic economic complementary agreement in 2006, but the negotiations have stalled since 2008 amid opposition from businesses in the Latin American country.

South Korea's Trade Minister Yeo Han-koo and Mexican Economy Minister Tatiana Clouthier held ministerial talks in Mexico City on Tuesday (Mexico time) and agreed upon the resumption for a free trade agreement (FTA), according to the Ministry of Trade, Industry and Energy.

The two sides are scheduled to begin preliminary consultations within this month with a goal to hold official talks in the first half of this year, it added.

"The two nations have shared the need for strategic cooperation on trade amid global supply disruptions after the outbreak of the COVID-19 pandemic," the ministry said.

Mexico is South Korea's largest export destination in the Central and South American region, and the two sides have "complementary trade structures," so an FTA, if clinched, is expected to create economic effects in a wide range of fields, including supply chains and digital trade, the ministry said. 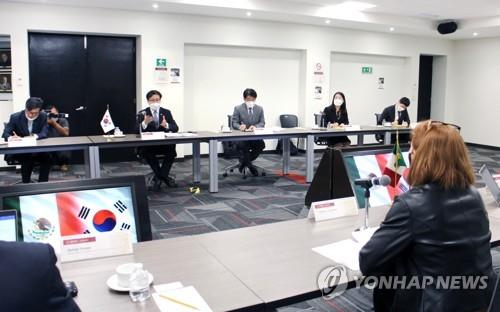