SEOUL, March 3 (Yonhap) -- Online shopping in South Korea rose 11.5 percent in January from a year earlier, with the proportion of transactions via mobile devices reaching a record high, amid the prolonged COVID-19 pandemic, data showed Thursday.

The value of online shopping transactions stood at 16.54 trillion won (US$13.74 billion) in January, compared with 14.84 trillion won recorded a year earlier, according to the data from Statistics Korea.

But the figure marked a 7.1 percent fall from the previous month when the figure reached a record high of 17.82 trillion won, it added.

Online transactions of food and beverages climbed 17.5 percent on-year to a record high of 2.48 trillion won, and those of agricultural, livestock and fisheries products increased 26.3 percent to hit an all-time high of 876.6 billion won, according to the data.

Online purchases of travel and transportation services more than doubled on-year to 1.17 trillion won in January due mainly to a low base effect caused by the new coronavirus and strict social distancing rules, the agency said.

Purchases made through smartphones, tablets and other mobile devices rose 17.5 percent on-year to 12.5 trillion won.

Mobile shopping accounted for 75.5 percent of the total value of online shopping, the highest level since the country began compiling related data in 2013, the data showed. 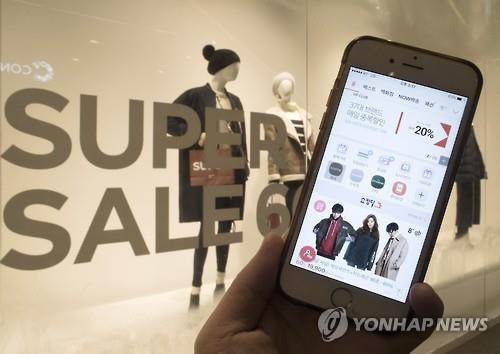 Online shopping up nearly 12 pct in Jan. amid COVID-19 pandemic

Online shopping up nearly 12 pct in Jan. amid COVID-19 pandemic