While many of the pledges have been officially announced by the candidates and their election camps, some are based on earlier remarks and known views.

Lee says he will take a conciliatory approach toward North Korea if elected while calling for simultaneously pursuing the North's denuclearization and sanctions relief.

The best solution to resolve North Korea's nuclear weapons program is conditional sanctions relief and phased simultaneous action, Lee says, referring to the use of a snapback mechanism under which sanctions would be restored in the event North Korea fails to live up to its denuclearization obligations.

Lee says he will meet with North Korean leader Kim Jong-un to persuade him to resolve the North's nuclear issue, taking a similar approach as the Moon Jae-in administration.

On the other hand, Yoon takes a harder line on North Korea, saying he will seek to further strengthen the U.S. extended deterrence to cope with threats from North Korea.

Yoon says he will also try to resume nuclear talks with North Korea based on a predictable denuclearization road map, a reciprocity principle, and close cooperation between South Korea and the U.S. International sanctions against the North should be maintained until its complete denuclearization, Yoon says.

To facilitate negotiations on the North's nuclear weapons program, Yoon says he would push to establish a permanent three-way dialogue channel among South Korea, North Korea and the U.S. on the inter-Korean border or in Washington, D.C. 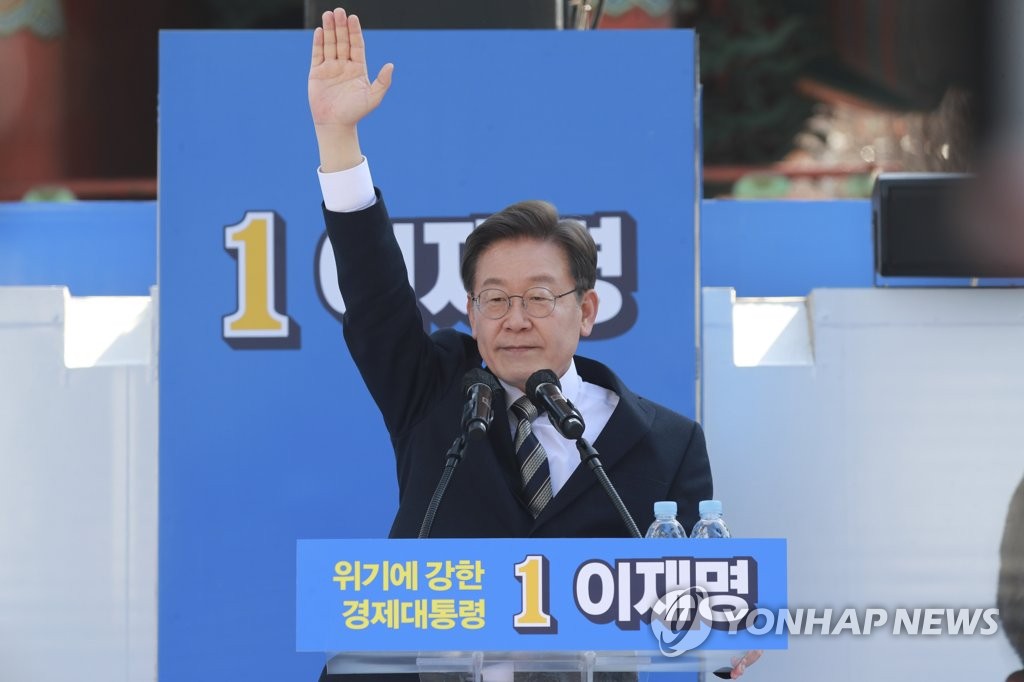 Both Lee and Yoon emphasize the importance of a strong alliance between South Korea and the U.S., but they struck a different tone toward China.

Lee rejects criticism that South Korea has maintained "strategic ambiguity" between the U.S. and China, in what has effectively been seen as a "tilting away" from its ally, the U.S.

Lee says the U.S. is the sole treaty ally of South Korea and the alliance was forged in the fire of the Korean War and over time has evolved into a comprehensive partnership.

Lee also says South Korea should maintain good relations with its largest trading partner China despite Beijing's "increasingly assertive behavior," as China's cooperation is key to addressing various issues in the region and beyond, including North Korea.

Yoon urges South Korea to forge a deeper alliance with the U.S. while retooling its relations with China.

A deeper alliance with Washington should be the central axis of Seoul's foreign policy, Yoon says.

Yoon says Beijing's top priority is to keep the stability of North Korea's Kim Jong-un regime, rather than the denuclearization of Pyongyang.

Yoon says South Korea and China differ strongly on security concerns, especially when it comes to North Korea. The Chinese government seems to support the denuclearization of the entire Korean Peninsula, rather than just North Korea, Yoon says.

Lee voices opposition to an additional deployment of the U.S. THAAD anti-missile system in South Korea, while Yoon pledges to deploy additional units of the THAAD system.

Both Lee and Yoon say South Korea and Japan must build a future-oriented partnership inspired by a 1998 joint declaration adopted by then President Kim Dae-jung and then Japanese Prime Minister Keizo Obuchi.

Lee says he will pursue a "two-track" approach of separating historical and territorial issues from social and economic cooperation.

Lee says perceptions that he is a Japan hawk are a "misunderstanding," because he personally loves the Japanese people and thinks highly of their frugality, diligence and politeness.

Yoon says he will not exploit historical tensions for domestic political gains. He also pledges to open a channel for "shuttle diplomacy" between the two countries' leaders, saying they should be able to communicate with an open mind at any time and on any topic. 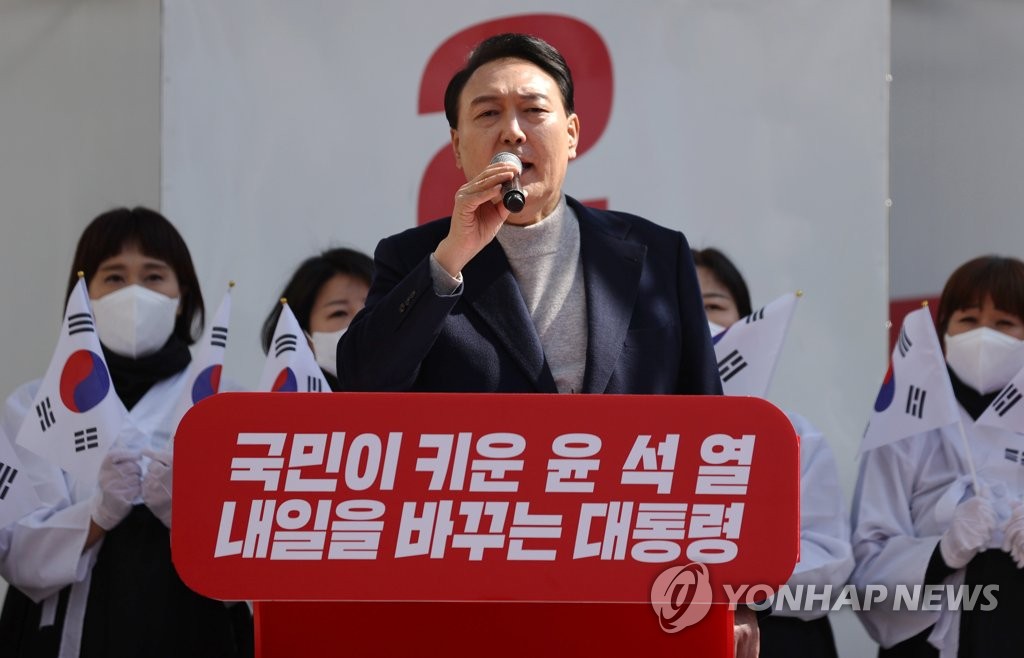 The COVID-19 pandemic response has been a central part of the two candidates' campaign pledges, but they took a different approach on how to provide cash handouts.

After offering cash handouts to all people, Lee says he will invoke an emergency order to provide 50 trillion won (US$41.7 billion) in assistance to small merchants hit by the pandemic.

Lee voices supports for an expansionary fiscal policy and universal basic income, while Yoon hints he may reject a fiscal policy based on "excessive" national debts.

Lee says he will provide 1 million won in universal basic income per person per year by creating taxes on land ownership and carbon emissions.

Yoon supports job creation led by the private sector, rather than government-led projects.

Yoon says he will give more leeway to private companies while cutting red tape and abolishing unnecessary regulations.

How to deal with housing problems and real estate taxes has become one of the most sensitive election issues, with the Moon Jae-in administration mainly blamed for botched property policies.

To rein in rising home prices, both Lee and Yoon pledge a sufficient supply of homes.

But they show different views on how to stabilize home prices. Lee says regulations should be toughened to stop speculative transactions of homes, while Yoon says current property policies ignore "market principles" and regulations must be eased.

Both Lee and Yoon pledge to supply 2.5 million new homes over the next five years.

The two candidates agree in principle on the need to rewrite the Constitution, which experts say fails to embrace social and political changes that have occurred since its last amendment in 1987.

However, revising the Constitution appears to be losing momentum, as both candidates show no signs of propelling the issue to the fore of their presidential campaign.

Lee pledges to pursue a constitutional revision to change the current single, five-year presidential term to a renewable, four-year term.

Yoon takes a cautious tone, saying a revision of the Constitution should be made in line with people's consensus and agreed-upon procedures.