BEIJING, March 3 (Yonhap) -- The South Korean romance "Something in the Rain" will be streamed on a Chinese online platform from Thursday, becoming the first Korean TV show to have won approval from Beijing's TV watchdog in about six years.

According to iQIYI, "Something in the Rain," starring Son Ye-jin and Jung Hae-in, will be available from 8 p.m. on Thursday.

The company will also release a Chinese version of the popular Korean TV series, which premiered in 2018 on JTBC, in May.

It is the second Korean TV series that has been released through an official TV channel or video platform in mainland China this year following the 2017 fantasy romance series "Saimdang: Memoir of Colors" in January. 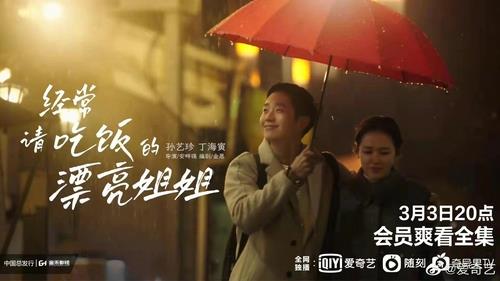 But "Something in the Rain" is considered the first Korean TV show approved by the Chinese National Radio and Television Administration (NRTA) since 2017, when Beijing imposed a tacit ban on Korean content in protest of Seoul's decision to deploy a U.S. missile defense system, known as THAAD.

"Saimdang" was permitted to be broadcast in November 2016, but its actual release took place in January this year.

"Something in the Rain" gained the NRTA's approval about a month after it had applied for review in January.

"I heard that the approval (of 'Something in the Rain') was made by the NRTA in Beijing," said Jang Seong-hwan, head of the Beijing Office of the Korea Copyright Commission. "If there are no other problems, Korean TV shows can be approved by the NRTA in other regions."

Recently, the Chinese government has been showing signs of change in its stance on Korean content, which has been absent from China's TV networks, formal video streaming platforms and cinemas for about five years. Korean artists and entertainers have been barred from having concerts or shows in China.

S. Korean drama 'Something in the Rain' to air in China

S. Korean drama 'Something in the Rain' to air in China