The five-year project worth 28.8 billion won (US$23.6 million) seeks to secure key technologies that enable ant- or bee-shaped robots to operate in a group for security or other missions, according to the Korea Research Institute for Defense Technology Planning and Advancement (KRIT).

Later in the day, the institute plans to hold a meeting with the consortium for the project -- led by the local defense firm LIG Nex1 Co. -- to embark on the project that runs through 2027.

The consortium includes Seoul National University and the Korea Advanced Institute of Science and Technology, as the government seeks to promote cooperation with the private sector and academia for broader technological spillovers.

The project also focuses on acquiring communication and other related technologies to operate tens of them simultaneously, according to KRIT.

KRIT said that it will work closely with other affiliated organizations, including the Army and the Defense Acquisition Program Administration, to deploy the system at the right time. 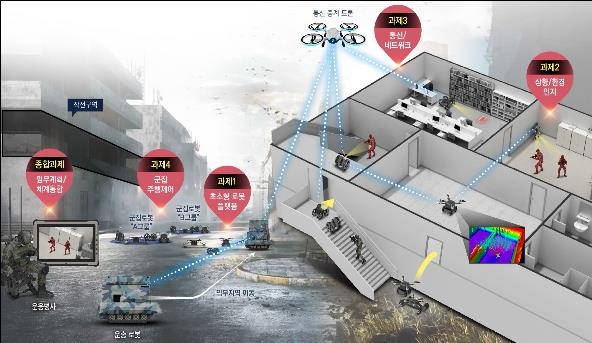