Trading volume was moderate at about 557 million shares worth some 11.9 trillion won (US$9.7 billion), with losers outnumbering gainers 755 to 141 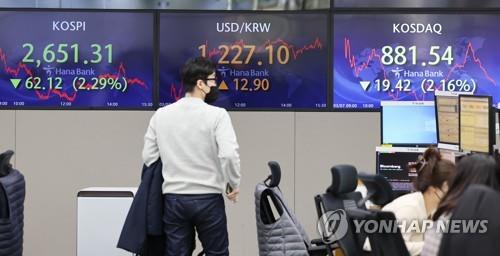 Stocks retreated for a second straight session on the escalating geopolitical tensions in Ukraine.

Investors' appetite for risky assets decreased as Brent crude hit an intraday high of US$139 a barrel, the highest since 2008, following reports the U.S. and its allies are working on an embargo on oil exports by Russia over its invasion of Ukraine.

"Oil prices soared with the intensifying tensions (over Ukraine), adding to the concerns that the rising prices may pressure the economy," said Daeshin Securities analyst Lee Kyung-min.

"The combination of rising prices, bond yield rates and economic circumstances seem to be weighing on the (financial) markets," he said.

Most large caps closed lower due to foreign and institutional sell-offs.

It marked the first time since June 2, 2020, that the local currency fell to end at the 1,220-won level against the dollar. The won hit an intraday low of 1,228 against the greenback.

South Korea's foreign exchange authorities made verbal intervention, saying they were closely monitoring the market to see if there were speculative movements by offshore investors or excessive jitters by market participants.

Market experts said the local currency may weaken to the 1,250-won level against the greenback if the geopolitical risk stemming from Ukraine crisis continues.

Bond prices, which move inversely to yields, closed lower. The yield on three-year Treasurys added 7.4 basis points to 2.288 percent, and the return on the benchmark five-year government bond rose 6.2 basis points to 2.525 percent.