The missiles were launched from Koksan County in North Hwanghae Province at around 9:35 p.m., according to South Korea's Joint Chiefs of Staff (JCS).

The JCS later said the North Korean missiles flew some 490 kilometers at apogees of some 130 kilometer at a top speech of Mach 6.

North Korea also fired some 80 artillery shells from around 11:30 p.m. Thursday into the military buffer zone in the East Sea, violating the 2018 agreement with South Korea designed to reduce military tension, according to the JCS.

The late night missile launch came less than an hour after Pak Jong-chon, secretary of the Central Committee of North Korea's ruling Workers' Party, released a statement denouncing South Korea and the U.S.'s earlier decision to extend the Vigilant Storm air drills that commenced on Monday.

"The irresponsible decision of the U.S. and South Korea is shoving the present situation caused by provocative military acts of the allied forces to an uncontrollable phase," he said in a statement carried by the Korean Central News Agency. "It is a very dangerous and false choice." 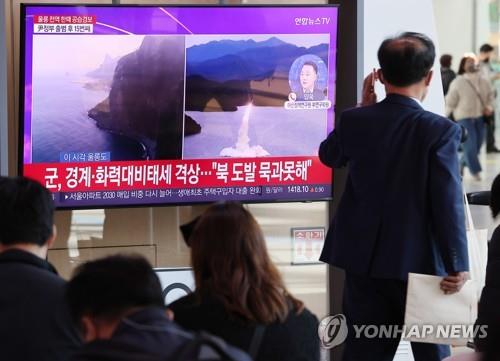 The missile launches are the North's apparent protest against Vigilant Storm, the allies' massive joint air drills involving more than 240 aircraft, including stealth jets, over the skies of the peninsula amid growing speculation that Pyongyang may conduct a nuclear test soon.

After the ICBM firing, South Korea's military announced that the air exercise will be extended, but did not provide details on the extension of the drills.