The US$400 million cathode materials JV in Quebec, Canada, will supply the materials to Ultium Cells that manufactures batteries for GM's EVs.

POSCO Chemicals, a unit of POSCO Group whose flagship is steel titan POSCO, said it may jack up its investment in the JV depending on GM's EV battery business. The JV is expected to help POSCO Chemical create a cathode supply network in North America.

A cathode is one source of lithium in a lithium-ion battery and is also a key component of EV batteries. It accounts for about 40 percent of a battery's cost of production.

In 2020, POSCO Chemical was chosen as a supplier of cathode materials for Ultium Cells, a joint venture that LG Energy Solution and GM set up in 2019.

POSCO Chemical's JV with GM is part of POSCO Group's push to boost its EV business in recent years as part of a diversification strategy.

The EV battery market has been growing fast as global automakers rush to go electric and eco-friendly due to tighter rules on greenhouse gas emissions seen as the main culprit for global warming. 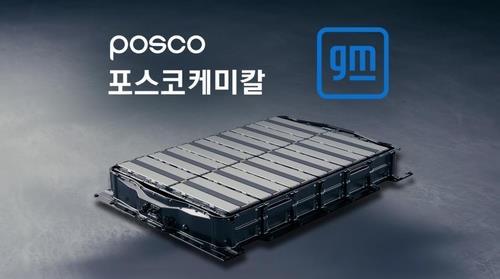