SEOUL, March 8 (Yonhap) -- The U.S. government has formally announced the exclusion of South Korea from its expanded export restrictions on Russia over its invasion of Ukraine, which enhances partner nations' joint efforts to implement strong sanctions against Moscow, Seoul's trade ministry said Tuesday.

Last month, the U.S. government announced the Foreign Direct Product Rule (FDPR) for all of Russia, calling on companies to receive a license from the United States for tech-related items using U.S. technology before they can be shipped to Russia.

South Korea had been originally excluded from a list of nations that were exempted from the FDP rule, raising concerns over its impacts on its major exporters but won an exemption last week after negotiations with the U.S. government.

"The U.S. Department of Commerce, through its Bureau of Industry and Security, added the Republic of Korea to the list of countries to receive an exclusion from the license requirements required under the U.S. Russia/Belarus Sanctions rules, including the foreign direct product (FDP) rules for Russia/Belarus," the joint statement issued by the two nations on Monday read.

Earlier, South Korea announced a series of sanctions against Russia, including halting financial transactions with seven major Russian banks and their affiliates slapped with U.S. sanctions, in line with the global move to remove Russia from the SWIFT global payment network. 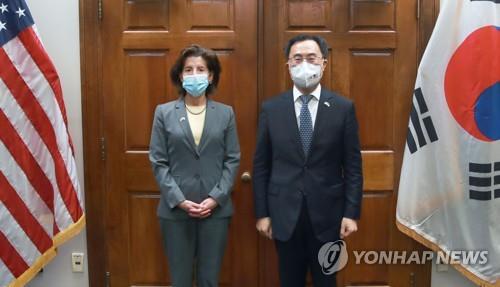 "This unprecedented multilateral coordination on export controls is a powerful component to ensuring our response to Russia's invasion is swift, severe and successful," U.S. Secretary of Commerce Gina Raimondo was quoted by the statement as saying.

The Seoul government also began taking follow-up measures of toughening its own export restrictions against Russia.

It decided to ban exports to 49 Russian organizations and firms, including Russia's defense ministry, in accordance with the U.S.' Entity List for export controls.

Under the measure, a license is required to export or transfer major items to those entities, with limited exceptions.

U.S. confirms exclusion of S. Korea from its export controls against Russia

U.S. confirms exclusion of S. Korea from its export controls against Russia